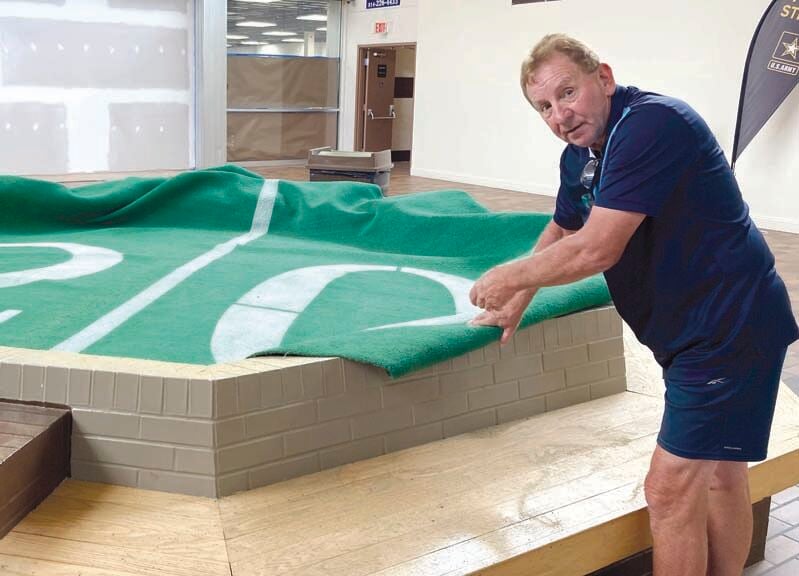 Ron Wiser donated the 15-by-17 feet piece of Three Rivers AstroTurf to the Zents family of Brookville for them to sell and raise funds for Zane Zents' cancer treatments. Wiser acquired the AstroTurf through a series of auctions. 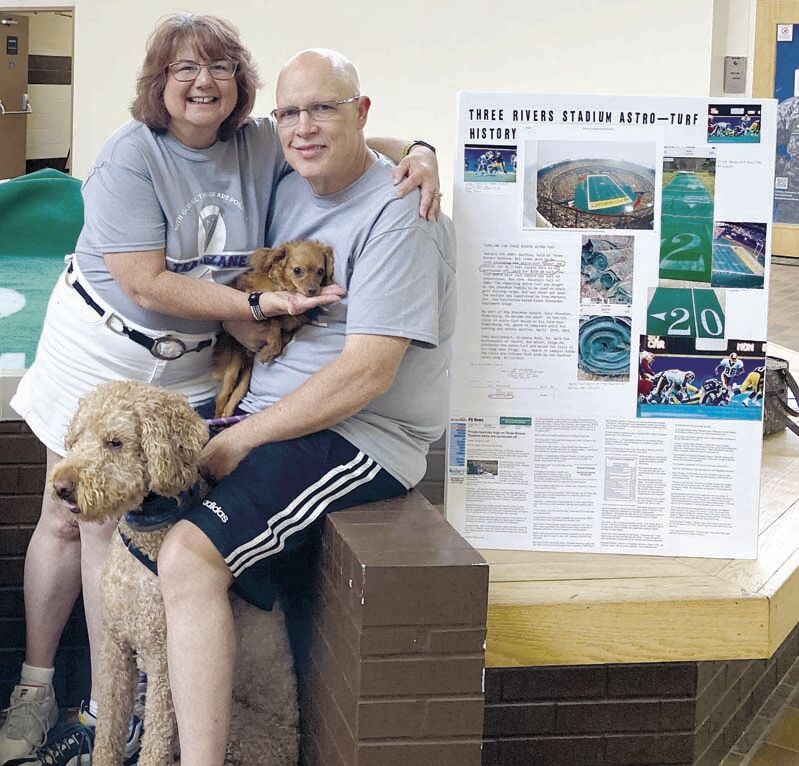 Jackie and Zane Zents along with their dogs, Luminex (small dog) and Rhodi Ola. Rhodi is a golden doodle and stays with Zane during the day providing him comfort. Luminex is a mini golden doodle who goes with Jackie to her dog grooming business and accompanies Zane to his treatments.

Ron Wiser donated the 15-by-17 feet piece of Three Rivers AstroTurf to the Zents family of Brookville for them to sell and raise funds for Zane Zents' cancer treatments. Wiser acquired the AstroTurf through a series of auctions.

Jackie and Zane Zents along with their dogs, Luminex (small dog) and Rhodi Ola. Rhodi is a golden doodle and stays with Zane during the day providing him comfort. Luminex is a mini golden doodle who goes with Jackie to her dog grooming business and accompanies Zane to his treatments.

SLIGO - For Ron Wiser, it really does seem like one man's trash is another's man's treasure. And some of that treasure will help a local cancer patient.

While attending an estate sale in Rimersburg in late April of this year, Wiser, who coaches girl's track at Clarion-Limestone, stumbled upon an incredible find: 112,000 square-feet of the old Three Rivers Stadium AstroTurf.

Three Rivers Stadium was a multipurpose stadium in Pittsburgh opened in 1970.

Located on the North Shore, near where Heinz Field and PNC Park are now, Three Rivers was home to both the Steelers and Pirates from its opening until the year 2000.

Three Rivers also hosted the Pitt Panthers football team occasionally, most prominently during their 2000 season when they played every home game there.

The AstroTurf Wiser has is not Three River's original surface. It replaced an older Tartan Turf in 1983.

The last game played at Three Rivers Stadium was a 24-3 Steelers victory against the Washington Redskins on Dec. 16, 2000.

However, before the stadium was imploded, plenty of memorabilia was sold off publically in two auctions.

Wiser says a family known as Shanahan purchased the majority of the AstroTurf at one of the auctions for $30,000.

From there, Wiser said the turf made its way to Gary Shanahan of Rimersburg, who passed away November of last year. It was during Shanahan's estate sale Wiser acquired the turf.

The 112,000 square-feet of AstroTurf is equivalent to 25 rolls, each 15-feet wide and 100 yards long. According to Wiser, each of the rolls weighs five tons. There's no question Wiser has a massive amount of AstroTurf.

Two articles from the Pittsburgh Post-Gazette dating to Jan. 7 and Jan. 9, 2001 describe 300, 3-by-3 feet pieces of turf being sold at the of the Three Rivers Stadium auctions.

Though there is no mention in the articles of 112,000 square feet of turf being sold at auction, Wiser stated he has contracted an attorney and has developed a chain of custody proving the turf is authentic.

This is important to Wiser as he plans on selling some of the turf to Pittsburgh sports fans. He wants to assure others what he has is authentic.

Wiser said he is targeting Steelers super fans, the ones who have entire man caves dedicated to watching their favorite team.

"People who are Steelers fanatics and are building man caves and want memorabilia of the Steelers, can you imagine," said Wiser.

The market for the Three River's turf exists, says Wiser, because of the immense dedication of some fans.

However, Wiser said he does not want to sell all of the turf.

"Suppose I roll it out and the center Steelers logo is there," said Wiser. "What do you think I'll do with that?"

The parts Wiser does decide to sell will go to buyers he deems worthy of owning a part of Pittsburgh sports history.

Turf for a cause

One thing Wiser does want to use the turf for is good causes. He gave away a large portion of his turf to a friend to use as a runway for model airplanes.

More recently, Wiser donated a 15-by-17 feet piece of turf cut around the 20-yard marker to a more serious cause.

One of Wiser's close friends, Zane Zents, of Brookville is diagnosed with a rare form of cancer, myxofibrosarcoma.

After having a tumor removed in his thigh last December, Zents, who is 58, discovered the cancer had spread to his lungs.

"Cancer is something we never planned for and it has taken so much from us already," said Zane's wife, Jackie Zents.

The Zents became friends with the Wisers through The Inne at Five Pointe. The Zents stayed there while they were engaged.

It was a no brainer for Wiser to help his friends.

"I'm just happy to help. I know (Zane) would do the same for me," said Wiser.

In order to raise funds for Zane's treatment, the Zents are hosting a BBQ-style benefit dinner at the Jefferson County Fairgrounds on July 30 starting at 4 p.m.

The Three Rivers turf Wiser donated to the Zents will be sold through sealed envelope bids at the dinner. The winner must be present at the dinner.

Currently, the turf is on display at the Clarion Mall in front of the army recruitment center.

The dinner will also feature a Chinese auction and a 50-50.

The Zents are asking for food donations, donations for the Chinese auction and for volunteers.

Anyone wishing to donate can drop or mail their items to Jackie Zents at 366 Hughey Rd. in Brookville, or her business A Stylist's Twist, Fur Styl'n at 242 North Findlay St. in Punxsutawney.

Early bids for the turf can be mailed to the Zents' Hughey Road address.