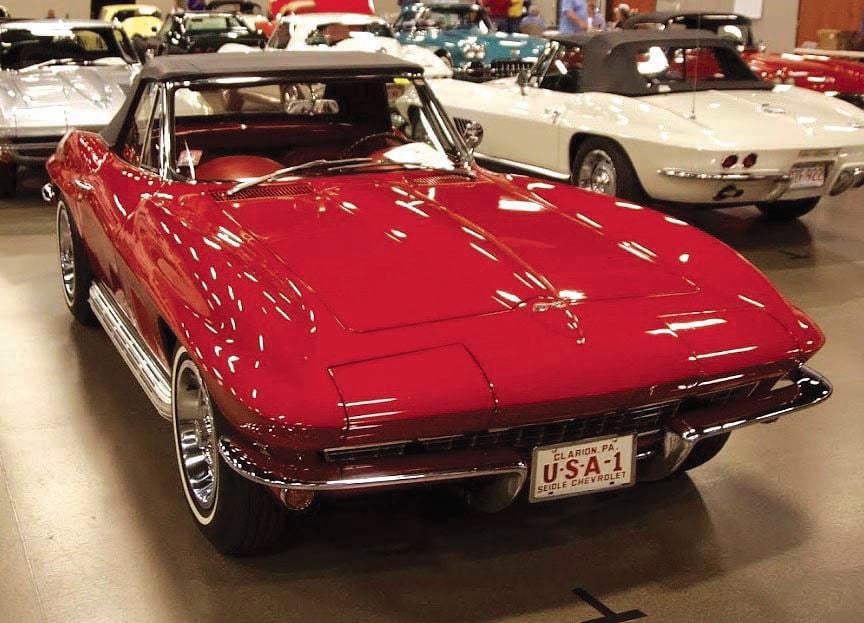 Bob Connolly of Norwell, Mass., owns this 1967 Chevrolet Corvette. The car was originally sold 53 years ago this week at Seidle Chevrolet in Clarion. Coincidently, an auction was held yesterday (June 24) at the former car dealership which closed its doors in August 2019.

Bob Connolly of Norwell, Mass., owns this 1967 Chevrolet Corvette. The car was originally sold 53 years ago this week at Seidle Chevrolet in Clarion. Coincidently, an auction was held yesterday (June 24) at the former car dealership which closed its doors in August 2019.

CLARION - There was a public auction scheduled for yesterday (June 24) at the former Seidle Chevrolet location in Clarion as the business closed last year.

The reasons behind the closing of the family-owned dealership were not disclosed.

Bob Connollyof Norwell, Mass., never visited Seidle Chevrolet but was sad to hear the news of the business's demise.

Connolly had planned to visit the dealership this week in his 1967 Chevrolet Corvette.

"I was disappointed to learn Seidle's had closed," said Connolly, via telephone. "I love a good road trip and I had looked Clarion up online and saw the photos of the town and I was going to bring the car down and show it to the people at Seidle's."

The award-winning Corvette, with just 36,000 original miles on the odometer, was sold by the Seidle dealership on June 27, 1967 53 years ago this week.

"The person who signed the owner protection plan and warranty book was someone by the name of James P. Dolan Jr.," Connelly wrote in an email exchange with the CLARION NEWS.

The classic Corvette, one of Chevrolet's most iconic cars, was originally purchased by R. Brooks Pfister of Butler.

Connolly said his '67 Corvette has earned a number of awards around the country including the NCRS Duntov Award, scoring 99.2 and the Bloomington Gold Benchmark Award.

Connolly has detailed records of the car's history. Pfister owned the Corvette for about seven years before selling to another Pennsylvania man.

That man owned it for about 35 years. When that owner inquired about selling it, two men from Ohio traveled to Pennsylvania to look at the classic automobile.

From their involvement with the car, a friend of Connolly obtained the car.

"I chased it for about eight years," said Connolly.

Connolly explained there are two schools of thought about old cars in good condition to clean or not too clean.

Connolly's friend followed the "don't clean," school, leaving the car exactly as it was when he bought it.

Connolly, 74, said he took the car home, put it up on jack stands and spent 40 hours thoroughly cleaning the Corvette with a simple household cleaner.

The original owner had stored the Corvette's soft-top when the car was new and replaced it with a "bubble top." Connolly obtained the soft top and now the car is entirely original and an awarding ride.

With Seidle's closed, Connolly doesn't know if he will bring the Corvette to Clarion, but he plans to drive through the town someday.

"I was kind of brokenhearted when I saw Seidle's is closed," said Connolly. "A lot of these classic cars were sold at small-town dealerships.

"But you know, even today, when I drive through a small town, I can still spot those buildings that were once car dealerships. They have a certain look."

The Seidle Chevrolet dealership is gone and now the tools, equipment and remaining parts are all gone as well.

But the building is there and maybe Connolly will drive by someday and spot it.

Operated by W.H. Seidle, Seidle Chevrolet began as a blacksmith, wagon repair and auto repair business in 1923. In 1932, the lot started selling and serving Chevrolets through the joint efforts of W.H. and Harold Seidle.

At that time, the location was in Transfer, Pa. In 1957, the business was moved to West Main Street in Clarion, where Flynn Tire currently stands. Ronald Seidle ran the dealership there until his death.

In 1964, the business was moved to the now-closed East Main Street location.