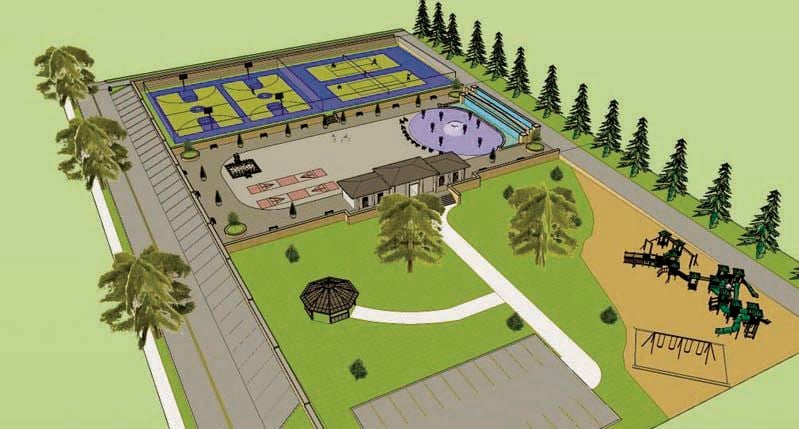 An artists rendering of a proposed neighborhood park along Second Avenue in Clarion Borough includes a water fountain-style fixture that also could be used to create an ice-skating rink, tennis courts, basketball courts, a walking path, seating, restrooms and other family-friendly features. 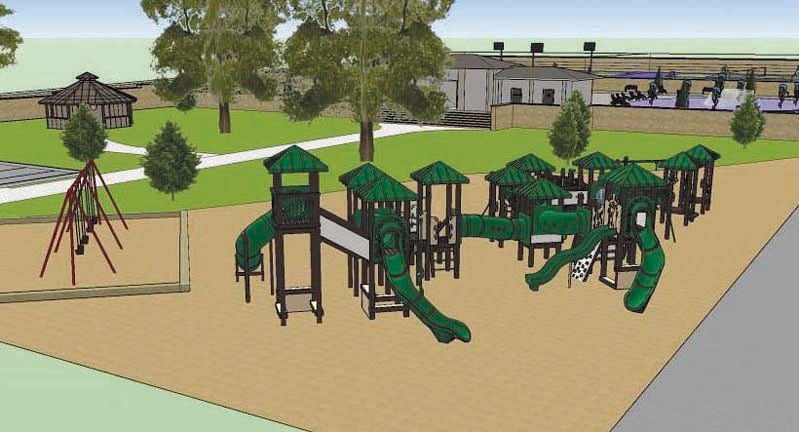 An artists rendering of a proposed neighborhood park along Second Avenue in Clarion Borough shows a portion of the possible playground equipment. Closing on the sale of the land needed for the park is set for October.

An artists rendering of a proposed neighborhood park along Second Avenue in Clarion Borough includes a water fountain-style fixture that also could be used to create an ice-skating rink, tennis courts, basketball courts, a walking path, seating, restrooms and other family-friendly features.

An artists rendering of a proposed neighborhood park along Second Avenue in Clarion Borough shows a portion of the possible playground equipment. Closing on the sale of the land needed for the park is set for October.

CLARION - The first step in building a community park within walking distance of downtown Clarion took a big step forward last week with the announcement land has been secured for the project.

Clarion Borough Council Member Brenda Sanders Dede made the announcement as the chair of the Clarion Blueprint Committee.

"I'm pleased to announce tonight that we have signed, on behalf of the 15-member board of directors of the Blueprint Committee, an agreement of sale for the property on Second Avenue for the development of a neighborhood park," said Dede.

Dede credited Clarion Borough resident Janice Horn for launching the effort a couple of years ago when she first inquired about establishing a community park.

Dede said the Blueprint Committee has agreed to purchase about 2.5 acres of land from the Second Avenue Development Corp. for $153,000.

According to online records with the Pennsylvania Department of State, Second Avenue Development Corp. is a Paint Township-based corporation founded in 2003.

Its partners include Robert Balough and H. Ray "Terry" Pope.

Dede said one of the owners of the Second Avenue Development Corp. has pledged to donate $30,000 back to the project after the sale of the property closes in October.

Horn confirmed to the CLARION NEWS that partner is Pope.

Dede said Miles Brothers LLC has donated $10,000 to be placed in escrow to help the Blueprint Committee complete the sales transaction.

Horn politely declined to reveal how much of her own money she is putting into the project.

Dede said a three-dimensional image of the proposed park developed by Miles Brothers has been created and should be on the borough website soon.

How it came about

Horn said she was pleased with the announcement about the park project.

"But this is only the first step to fruition," Horn said in an email exchange with the CLARION NEWS. "It's a vital first step and the next ones are going to require a lot of work.

"Fortunately, there are several people involved who have great experience identifying sources of grants and in writing the applications."

Horn said her idea for a neighborhood park came about a few years ago.

"I've lived here for over 50 years and hadn't really thought about the absence of a readily-accessible user-friendly community park until after my husband Roger passed away," Horn wrote in an email. "When my relatives from Wisconsin arrived for his memorial, they came with lunch preparations and suggested we go to the park for lunch."

Horn said she realized Clarion Borough residents don't have what her family was accustomed to.

Horn said her relatives came from a farming village of 200 people but where they had access to two parks within walking distance and another about three miles away.

"I had been thinking of doing something for Clarion and that clarified for me what I wanted to do," said Horn. "I established a fund with Bridge Builders Community Foundations and formed a committee.

"We prepared a questionnaire in 2018 and had a good response with many saying very enthusiastic things, offering excellent ideas and offers to become involved."

Horn added, "One of the goals I have for a park is to have a playground accessible to small children and their parents; to easily and safely reach it on foot and for older children to be able to safely ride their bikes to it."

Other people step up to help

With the land secured, planning and fundraising turn toward park amenities.

Dede said the park will include a water fountain-style fixture that also could be used to create an ice-skating rink, tennis courts, basketball courts, a walking path, seating, restrooms and other family-friendly features.

Horn said she does not have a definitive estimate for the cost of the park amenities.

"Theron Miles has better estimates on the cost than I do," said Horn. "He and his brothers have had experience creating other parks -- Brookville, Zelienople, and Meadville are the ones I know about. Based on what I've heard him say is that it will be over $500,000."

Horn said Miles discussed the ideas he had with the Blueprint Committee.

"It was in those discussions that he found out about the idea I had," said Horn. "We met after that and shared ideas. Without his interest I would still be trying to find property for a small park. He is working with the EADS Group on the design."

Dede said she has mentioned the park project to other people in the area and has already received pledges of financial support.

"Hopefully, there will be others who are willing to help, too," said Dede.

"I'd like to see the community come together around this project," added Horn.

Dede said the Blueprint Committee also is looking for other grant opportunities.