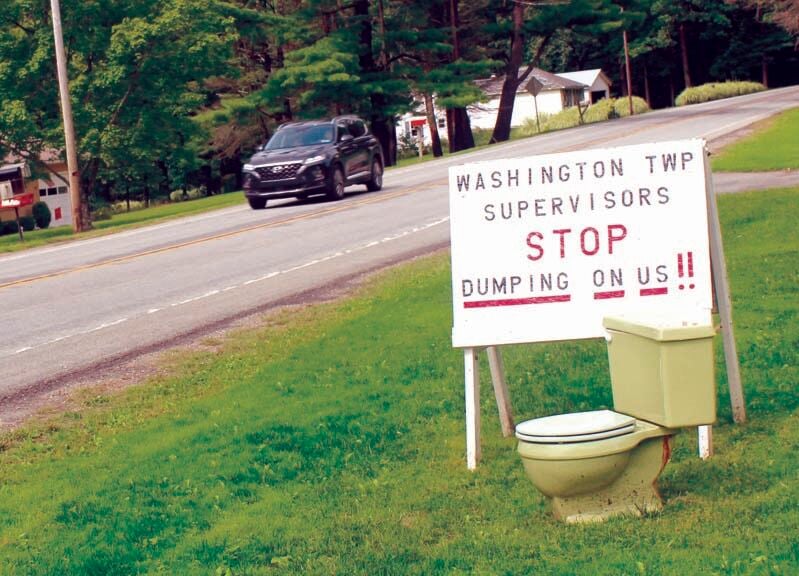 Protests against a proposed Washington Township sewerage service line extension are spread throughout the township and include this sign and accompanying visual aid along State Route 208 just south of Marble and Fryburg. 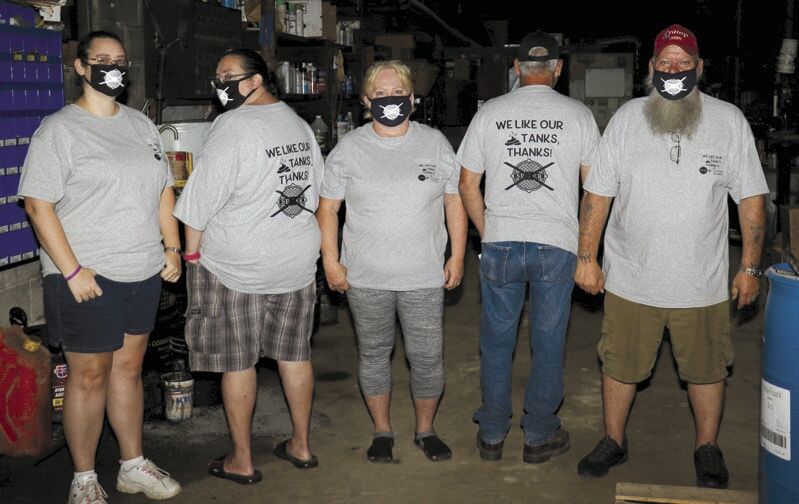 Members of "The Residents of Washington Township" group, opponents of a proposed sewerage line extension project, were wearing their position on custom-made T-shirts at last week's meeting of the township board of supervisors and municipal authority. Pictured from left are: Valorie LaCross, Tammy LaCross, Judith Ackermann, Kevin McCauley and Peter Ackermann.

Protests against a proposed Washington Township sewerage service line extension are spread throughout the township and include this sign and accompanying visual aid along State Route 208 just south of Marble and Fryburg.

Members of "The Residents of Washington Township" group, opponents of a proposed sewerage line extension project, were wearing their position on custom-made T-shirts at last week's meeting of the township board of supervisors and municipal authority. Pictured from left are: Valorie LaCross, Tammy LaCross, Judith Ackermann, Kevin McCauley and Peter Ackermann.

A handful of residents attended the meeting held in the Washington Township Municipal building on State Route 36 and voiced their displeasure about a number of things.

One of the biggest gripes the crowd had was in regard to how the issue was being portrayed in the local media.

"I'm a little bit upset about the article that appeared in the CLARION NEWS two weeks ago where you said this project was under mandate which it isn't and where you said all legal action was done and most of those things were untrue," said township resident Bill Aaron to the municipal board. "I was a little bit put out by that because it just wasn't true."

In the Aug. 27 edition of the CLARION NEWS it was stated the township residents filed an appeal to the state Environmental Hearing Board to have the Pennsylvania Department of Environmental Protection mandate for the project to be overturned.

Washington Township secretary Jacqui Blose said the township's legal counsel Mark Shaw was responsible for the information which was printed in the newspaper.

"Does Mark Shaw know that you are not under mandate by the DEP?," Aaron inquired.

Washington Township legal counsel Joe Keebler believes there was a miscommunication between Shaw and the CLARION NEWS.

"He (Shaw) would absolutely know there is no mandate," Keebler said. "I'm thinking there was some miscommunication."

Later in the meeting, Aaron said he is upset with how The EADS Group engineering firm has handled the project from the beginning.

"(During) The informational meetings we had with The EADS Group, we were told what we were going to do, we weren't asked what we wanted to do," Aaron said. "Nobody asked if I wanted to participate (in the sewage line extension), I was told I had to."

Aaron also had an issue with the way EADS was getting paid for the project.

"Is (EADS) going to get paid whether they finish this project or not?" Aaron inquired.

Blose responded, "Yes. I'm fairly sure the contract (for this project) is similar to past contracts and (EADS) is entitled to get paid whether the project goes through or not."

Aaron inquired why EADS would still be paid if the project doesn't get finished.

The EADS Group project engineer Kyle Schwabenbauer stated the firm would be paid for the engineering and design done so far on the project.

The "Residents of Washington Township" group spokesman Kevin McCauley stated the municipal authority had almost $500,000 invested in the project already. However, Blose disagreed with McCauley's assessment.

"I wouldn't throw numbers around that are not based in fact," Blose said. "EADS can provide you with an actual billing number on this project."

McCauley stated after the meeting he got the $500,000 figure from the Residents of Washington Township group's attorney.

During the meeting, McCauley went on to claim EADS would take a percentage of the project's total cost. McCauley believes the fee would be around 20 percent.

"We have a service agreement we have set up and it's not always a simple percentage," Schwabenbauer said. "It depends on the type of project."

Aaron disagreed with the statements being made by EADS and the supervisors.

"They (EADS) are making 20 to 25 percent before a shovelful of dirt is turned," Aaron said.

McCauley said the projected cost for the project is now $2.4 million. However, Schwabenbauer disagreed with McCauley's statement.

"That number is inaccurate," Schwabenbauer said regarding the $2.4 million figure. "The PennVEST funding for the project was $1.964 million and that is fully funded."

"(EADS) says it's fully-funded but it's not fully-funded," McCauley said. "Because the cost figures they use are cookie-cutter costs. They figure so many feet for so many pipe and none of this has gone out for a bid yet. (EADS) takes and projects these prices so they can go to PennVEST and ask for a loan or ask for grant money. And when once it's done and they found out they had problems on the job or something didn't turn out the way they planned and that cost figure keeps going up. And the cost of the extras ends up in (the taxpayers) laps."

Keebler interjected, "These numbers are speculative until the project moves forward."

McCauley said he believes the cost figures the presented to PennVEST to secure the grant were too low.

"We are going to run over the estimate in the operational material cost an over an extended period of time, we're going to be way over that estimate," McCauley said. "This township will never be able to dig itself out of this hole. This plant will expel itself and we are going to be back in the hole again looking to rebuild another plant."

McCauley said he believes there have been some bad faith dealings between EADS and the township.

"The EADS Group propagated this on to our township by initially telling us the DEP would not accept a take-no-action plan, which was false," McCauley said after the conclusion of the meeting. "I had a meeting with my lawyer and the DEP and the DEP flat out told me our township was not required to (extend the sewage lines) and the township is doing this on its own.

"It was not mandated by the decree because I have read the decree. The judge only decreed that the sewage treatment plant be repaired years ago. He didn't decree we needed to do extensions. But the township lied and printed it in their papers that it was decreed.

"After (the township residents) called them out on it, the township then changed it to say the DEP was mandating that the extensions. When I had a meeting with the DEP, the DEP threw their hands up and said No we didn't. The township is doing that on its own.'"

Grieving mom urges parents to promise to get flu vaccinations