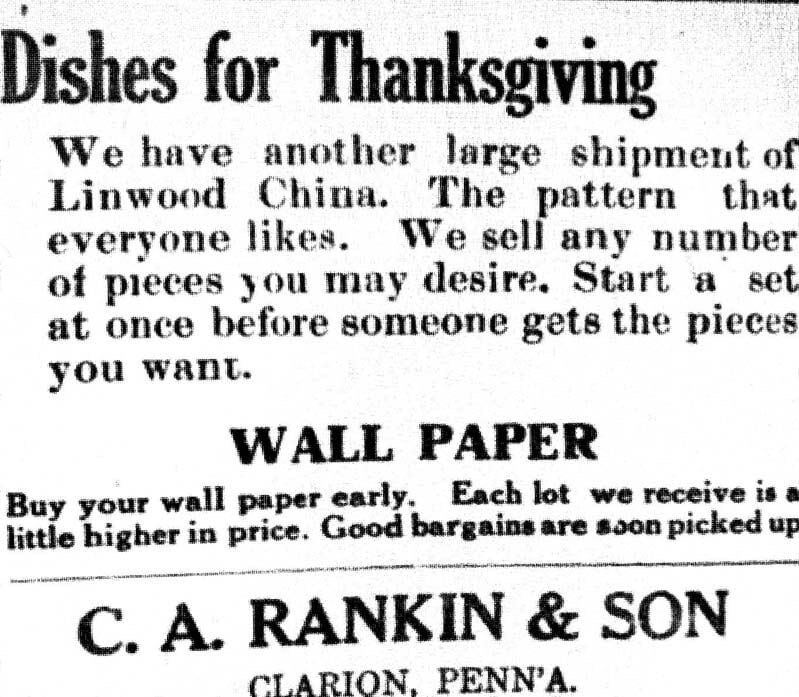 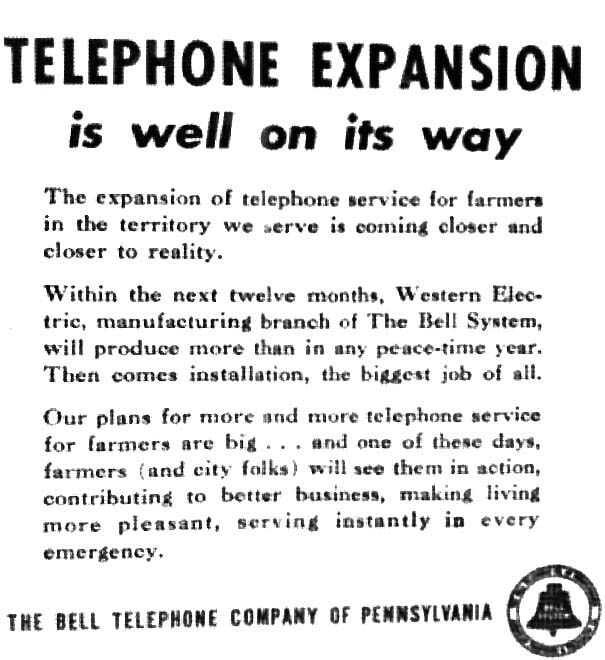 uGeorge Seigworth has bought the farm of his father in Clarion Township. Perhaps he will develop the coal. George is a hustler.

uThe great "Price Adjustment Sale" at the Clarion Dry Goods store is one of the great events of the season. The people who are getting these bargains are the wise ones.

uMoore's Store has announced a large sale of silks from the Jefferson Silk Corporation in Reynoldsville. These silks are superb creations.

uDr. C.C. Snyder of Clarion has installed an X-Ray machine for taking pictures of all kinds of fractures. The machine is now in operation. He believes in keeping abreast of the times.

uAbout 100 businessmen from Clarion, Shippenville, Strattanville and Knox participated in a banquet at the New Jones House in Clarion to celebrate the opening of the state highway between Strattanville and Clarion. A fund was started to pave Main Street in Clarion from Ninth Avenue to the borough line. The banquet was a success and so is the new section of highway.

uArmistice Day in Clarion proved to be a day of precious memories of the past when war was troubling the whole world. The parade and the meeting in the courthouse met with great enthusiasm.

uThe Clarion Service Star Legion gave a banquet in the Loomis House on Armistice Day for the members of the Craig Fleming Post of The American Legion and other area veterans of the World War. The service men gave three rousing cheers and a tiger for the Service Star Legion as evidence of their appreciation.

uSgt. Clifford M. Johnston of Sligo received an Honorable Discharge from the Army Air Corps. He enlisted in Dec. 1943 and served with the 15th Air Force in Italy as a gunner on a B-24 bomber. He completed 25 missions and was awarded the Air Medal with two Oak Leaf Clusters and America, European Theater ribbons with a Silver Star. His brother Sgt. Robert Johnston was recently awarded a Purple Heart.

uMrs. Frank Martz of Ringgold, a daughter of Gilbert Burns, the former Clarion County Commissioner, gave birth to a son on a railway embankment at Punxsutawney early Friday morning after being thrown from a speeding auto that was crushed by a freight train. Mr. Martz was rushing his wife to the hospital when a "double header" freight train struck their car carrying it 600 feet down the track and crushing it into scrap metal. Mr. Martz suffered bruises but the couple's 21 year-old daughter Mary was trapped in the car, which caught fire. She died 20 minutes after she was pulled from the car. Mrs. Martz suffered fractures to both legs and one arm. The baby was reported to be doing well. They were only a block away from the hospital when the accident happened.

uThe state police are searching for the driver of a car that ran over and almost instantly killed John Tevlin, 63, of Tuscarora, N.Y. on Route 68 just south of Snydersburg. The man was struck while lying prone in the middle of the highway. Leo Schwabenbauer of Snydersburg found him on the road and was trying to get help when the car struck him.

uA.F. Hess has announced the sale of the Loomis House and the former Hess garage to Joseph James and Henry and Victor Troese. Victor Troese, who recently returned from the service, said the hotel building would undergo extensive remodeling and that a modern dining room and cocktail lounge would be added.

uMiss Charlotte Carter, home economics extension representative for Clarion County report a total of 154 girls have enrolled in 15 4-H clubs in the county.