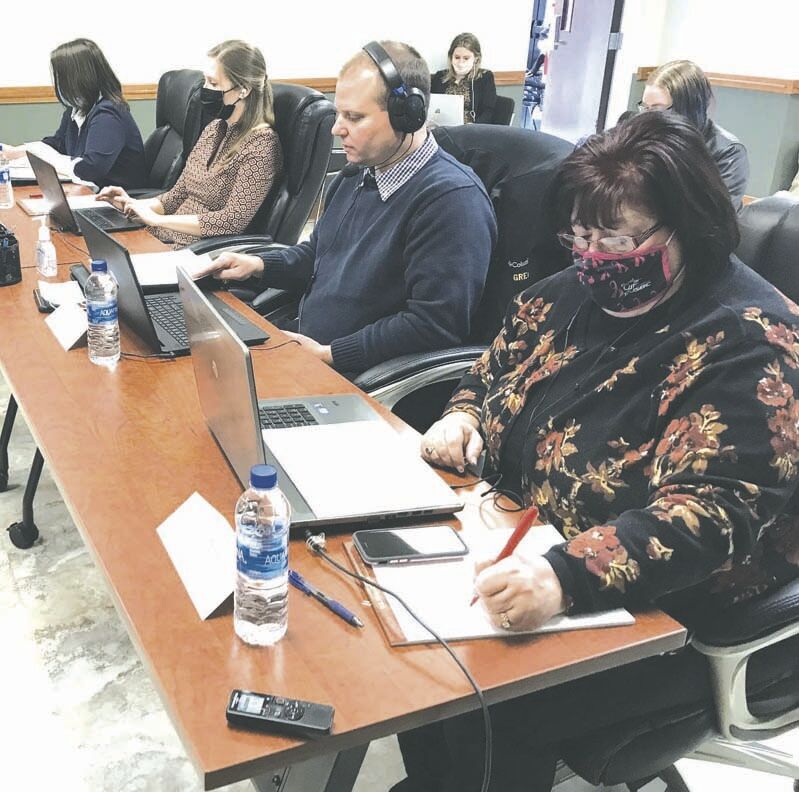 Testifying at a hearing on the plan to toll select Interstate bridges in Pennsylvania April 1 in Clarion were left to right, Rebecca Oyler of the Pennsylvania Motor Trucking Association, Stephanie Kane of the Alliance for Toll Free Interstates, Greg Lander of Klapec Trucking Company and Clarion Chamber of Business and Industry Executive Director Tracy Becker. Additional testimony was provided via Zoom.

Testifying at a hearing on the plan to toll select Interstate bridges in Pennsylvania April 1 in Clarion were left to right, Rebecca Oyler of the Pennsylvania Motor Trucking Association, Stephanie Kane of the Alliance for Toll Free Interstates, Greg Lander of Klapec Trucking Company and Clarion Chamber of Business and Industry Executive Director Tracy Becker. Additional testimony was provided via Zoom.

CLARION - A "loophole" in federal law opens the possibility of tolls on select interstate bridges, including those on Interstate 80 in Clarion and Jefferson counties.

"There is a loophole in the law that allows for the repair or replacement of bridges," said U.S. Rep. Glenn "GT" Thompson, R-15 District, at an April 1 hearing on the matter in Clarion.

After the hearing, Thompson said the last time tolling of I-80 was raised was for a corridor, which was stopped in Congress.

Now, the Pennsylvania Department of Transportation plans to replace the North Fork bridges in Jefferson County and the Canoe Creek bridges in Clarion County, and both are being considered as toll bridges.

"It (tolling) may be eligible through that loophole, but they still have to check with the local community; they have to look at traffic diversion," Thompson said.

During his discussion with the PennDOT Secretary Yassmin Gramian, Thompson said they talked about trucks coming off of I-80 and onto U.S. Route 322.

"They (PennDOT) would actually make the roads narrower so truck traffic could not utilize them," Thompson said. "These folks really need to be talking with the communities. That is why I was so disappointed that the secretary did not take questions today. To me that is a lack of good faith.

"They have to have the blessing of the state Legislature, and the governor is trying to circumvent the Legislature."

The Pennsylvania Public-Private Partnership (P3) board approved the Major Bridge P3 Initiative on Nov. 12, which allows PennDOT to use the P3 delivery model for major bridges in need of rehabilitation or replacement, and to consider alternative funding methods for these locations.

Nine bridges are on the list, including four on I-80.

A PennDOT spokesperson said although Gramian was unable to remain, the secretary had arranged for two senior staff members directly involved in the project to remain in the meeting to answer questions.

"We are disappointed that most of the participants did not give our staff the opportunity to answer their questions," said an email statement from the spokesperson that arrived after the hearing. "We look forward to responding to the written questions which Congressman Thompson indicated would be forthcoming."

In her testimony before the panel, Rebecca Oyler, president and CEO of the Pennsylvania Motor Trucking Association, said the trucking industry supports infrastructure improvements, but it already pays a large portion of the bill. "This is our workplace," she said. "For many Pennsylvania trucking companies, bridge tolling may be the final straw."

Oyler, who noted Pennsylvania is the third most expensive state to operate a truck, said a truck crossing the bridges in the Clarion area twice a day would be paying $62,000 a year.

"This puts Pennsylvania-based companies at a significant disadvantage against companies from, say, Ohio," she said. "PennDOT's bridge tolling strategy is the wrong approach. It is a tax that further contributes to making Pennsylvania's trucking industry uncompetitive and set it up for failure."

Stephanie Kane, of the Alliance for Toll Free Interstates, said tolls are a "large hidden tax" on the supply chain.

"Tolls are expensive and complicated to run to the point of being fiscally irresponsible," she said. "Look at the Pennsylvania Turnpike, which recently gained the dubious honor of being named the most expensive toll road in the world."

Kane said there are many unanswered questions, including amount of the toll, how much money would the state receive and how communities along I-80 would be affected.

"The lack of transparency has been glaring," Kane said.

The P3 board, she said, approved the plan without disclosing the project bridge locations.

Clarion Area Chamber of Business & Industry Executive Director Tracy Becker said when she learned of the tolling plan she was concerned.

"This is too much for our businesses and our residents," Becker said. "Our businesses are just hanging on, and now they want to toll the bridges. When is this going to stop? We are ready to fight the fight."

"These tolls will elevate the price of all materials; making it impossible for companies to be competitive and forcing them to relocate out of our commonwealth," he said.

Rollout of the plan

Hutchinson said "one of the cardinal sins that has occurred here" is the proposal came when the Pennsylvania General Assembly was dissolving itself for the year.

"It came in the middle of the night and was implemented by a panel (the P3 board) that, really, has not done a whole lot," he said. "They rolled out this proposal with no specific bridges or dollar amount. There was a complete lack of transparency."

Kane said the General Assembly can rule on the P3 board's recommendation, but the timing of the announcement left the lawmakers little time to act on it. "The specific bridges were not announced until after the deadline for the Legislature to act had passed," she said.

Oberlander said she pointed out to Gramian that tolling the I-80 bridges was tolling the interstate.

"We all know this will create diversion," she said. "We all know what happens when there is an accident on I-80 and traffic is diverted to Route 322."

Dush expressed concern over what he perceived could happen to small towns, like Brookville, along I-80.

"It would choke off our local businesses," he said. "This whole thing is a policy decision that should have gone through the legislature."

James had questions directed toward Gramian, who had left the meeting to attend a Cabinet meeting with Gov. Tom Wolf.

"I would like to know the legal standing for imposing all of these tolls and can you justify the timing of the announcement?" James said.

A "new committee (on alternative funding for PennDOT)," James said, was mentioned.

"I would think that knowing this hearing was coming up that the secretary would have had some ideas to share with us," James said. "I would like to know what sources of revenue are being considered.

"I would also like to know what the costs are going to be to roll more traffic through the communities. Are we going to set aside funds to help them? I don't know because that was not discussed here today."

James also wanted to ask Gramian if the tolls would be temporary.

"I know I won't get those answers today," he said.

Engage your kids with healthy snacks and family movies

What if you could dramatically improve your sleep? Here are 8 tips you can’t afford to miss

5 ways to put some spring into your cocktails

6 tips for hitting the road again