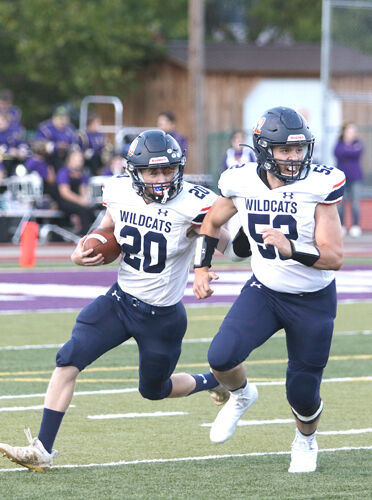 Central Clarions Breckin Rex (No. 20) follows a lead block from Luca Cherico. Rex rushed for a team-high 93 yards which included a 70-yard touchdown run in the first quarter. 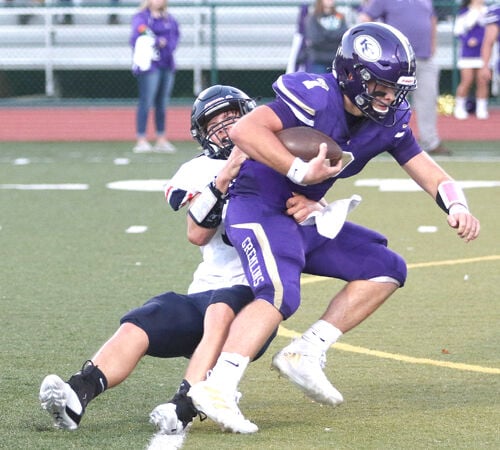 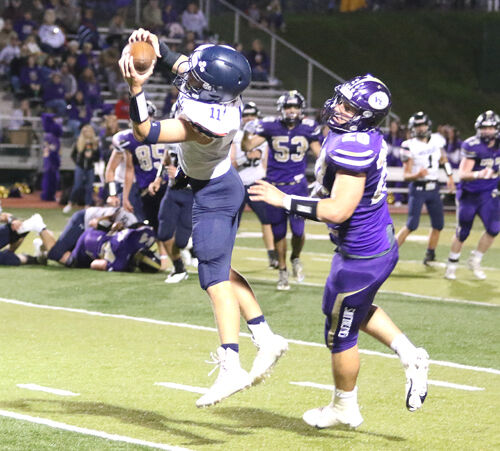 Central Clarions Ryan Hummell snared a pass in front of Karns Citys Luke Garing and raced all the way to the 1 but the 26-yard completion was called back due to a penalty.

Central Clarions Breckin Rex (No. 20) follows a lead block from Luca Cherico. Rex rushed for a team-high 93 yards which included a 70-yard touchdown run in the first quarter.

Central Clarions Ryan Hummell snared a pass in front of Karns Citys Luke Garing and raced all the way to the 1 but the 26-yard completion was called back due to a penalty.

It was a good news/bad news kind of a night for the Central Clarion football team with the good news being that after two weeks of uncertainty, the Wildcats were finally getting to play a regularly scheduled game versus a league opponent but the bad news was said opponent was an undefeated Karns City team.

Visiting Central Clarion landed the first punch against the Gremlins by scoring the opening touchdown but Karns City responded with 37-straight points as the Gremlins downed the Wildcats 37-13 Friday night (Sept. 10).

"He actually had a pretty good ankle injury earlier in the week so it was iffy if he was even going to play tonight," Karns City head coach Joe Sherwin said. "He is just a beast in there and he just powered through. He is a warrior out there."

Sherwin also gave a lot of credit to his offensive line for the team's rushing success.

"Our offensive line did a pretty good job as well," Sherwin said. "We actually had a lot of guys out from last week so at one point we had a completely different offensive line than we did last week. We try to get everybody ready to go and trained and those guys up front did a nice job."

Senior Karns City tailback Jayce Anderson rushed for two scores and had 72 yards on the ground.

For Central Clarion, playing a regularly scheduled opponent was a refreshing change. The Wildcats first two league opponents (Punxsutawney and Moniteau) had to cancel their respective games due to COVID-19 issues. Central Clarion was able to scramble and find a replacement opponent for their opener against Punxsutawney when the Wildcats were able to agree to a game with Slippery Rock at the 11th hour. The Wildcats were unable to find an opponent for last week's cancellation with Moniteau.

"We've had to go through a lot of adversity," Central Clarion head coach Davey Eggleton said. "We talk a lot about dealing with adversity but I don't think we could have prepared for this much adversity. We lost our first scrimmage, lost our first game and then picked up a game at the last minute, lost a second game. We're not nearly as good as we are going to be but as the season progresses; we are just going to keep getting better. We're just going to keep on working at it and find a way to overcome some of the adversity we are hitting now and it will make us better in the end."

Although they had a long layoff, Central Clarion's defense looked like it was up to the challenge with the Gremlins as the Wildcats forced a three-and-out on Karns City's opening possession. A key play in the sequence was a third down sack by Central Clarion's Mason Songer.

The Wildcats (0-2, 0-1) began the ensuing possession on their own 20. After a 2-yard run by Breckin Rex, Central Clarion quarterback Jase Ferguson connected with Tommy Smith over the middle for an 8-yard gain. On the next play, Rex took the handoff from Ferguson, cut right, broke a pair of tackles and broke free down the right sideline and outran the Gremlin secondary for a 70-yard touchdown.

"That was a phenomenal run by Breckin," Eggleton said. "He broke a couple of tackles and he was gone.

"We tried to get (Breckin) the ball more in the first half but we were behind the sticks so much every time we had the ball and we didn't have the ball that much."

Charlie Franchino missed the extra-point to the left but the Wildcats held a 6-0 lead with 8:33 remaining in the first quarter.

Karns City responded to the Wildcat score with a methodical 11-play march which was capped by a 35-yard touchdown pass from Eric Booher to Nate Garing.

It looked like the Gremlins' drive might stall at its own 30 but Zach Blair ran for a 5-yard gain to convert a third-and-1. Later in the drive, Karns City faced a fourth-and-1 at the Central Clarion 43 and Luke Garing got the Gremlins another first down when he took a direct snap in the wildcat formation and ran off the right side for a 6-yard gain.

Zach Kelly booted the extra-point to give Karns City a 7-6 lead with 3:11 remaining in the first quarter.

On the ensuing drive, Ferguson was sacked by Blair for a 9-yard loss on third-and-3 play forcing a Wildcat punt. Ashton Rex lined up to punt for Central Clarion but the snap sailed over his head. Breckin Rex retreated to pick up the ball and attempted to run for the first down but he was tackled for a 14-yard loss giving the Gremlins the ball at the Clarion 26.

"We knew against a team like Karns City, we had to limit mistakes,"

Karns City capitalized on the short field three plays later with Anderson plowing into the end zone from three yards out.

Luke Garing ran in the two-point conversion out of the wildcat formation pushing the Gremlin lead to 15-6 with 11:54 remaining in the first half.

On the first play of the ensuing Karns City possession, Ian Hagen sacked Booher for a 12-yard loss. But the Gremlins converted the first down in two plays with Booher connecting with Isaac Herrero for an 8-yard gain followed by Booher taking off for a 14-yard run giving the Gremlins a first-and-10 at the Central Clarion 37. Karns City covered the last 37 yards of the drive with six-straight rushing plays with Luke Garing carrying the ball four times for 27 yards including a 2-yard TD plunge.

Kelly kicked the PAT to push the Gremlin lead to 22-6 with 5:55 left in the second quarter.

Nate Garing outwrestled Christian Simko to pick off a Ferguson pass near midfield at the 5:15 mark of the period.

Karns City capitalized on the turnover a little over four minutes later when Booher threw a fourth-and-10 swing pass to Cooper Coyle in the left flat and Coyle dodged a pair of Wildcat defenders on the way to the end zone for the 14-yard touchdown.

Kelly missed on the extra-point but the Gremlins held a 28-6 lead with 1:09 left in the first half.

Ferguson connected with Simko for an apparent 27-yard gain that would have given the Wildcats a first down at the Karns City 41 but the Wildcats were flagged for a holding call wiping out the completion.

After halftime, Ferguson connected with Ashton Rex for a 29-yard completion putting the Wildcats at the Karns City 36. Later in the drive, it looked like Ferguson had completed a 26-yard pass to Ryan Hummel giving Central Clarion a first-and-goal at the Gremlin 1 but the Wildcats were flagged for an illegal shift wiping out the completion. On the first snap after the penalty, the Gremlins' Aaron Taylor sacked Ferguson for a 10-yard loss forcing the Wildcats to punt.

The Gremlins drove from their own 25 to the Central Clarion 8 with Luke Garing breaking off a 34-yard run while Booher and Anderson hooked up for a 27-yard pass completion. However, the Karns City drive stalled deep in Central Clarion territory and the Gremlins turned the ball over on downs at the Wildcat 8.

Ferguson connected with Ashton Rex for a 19-yard gain on the first play after the change of possession but Ferguson's next three passes fell incomplete and the Wildcats were forced to punt.

Karns City drove deep into Central Clarion on the following drive but Booher fumbled inside the Wildcat 10 and Hummell pounced on the loose ball at the Central Clarion 8.

Two plays after the turnover, the Gremlins' Nathan Lessner shot the gap and sacked Ferguson in the end zone for a safety extending the Karns City lead to 30-6.

The Gremlins got the ball back at the Central Clarion 33 and put together a seven-play drive capped by a 1-yard touchdown plunge by Anderson.

Kelly's PAT kick pushed the Gremlins' lead to 37-6 with 4:27 left in regulation.

The Wildcats scored in short order on the ensuing possession. Breckin Rex opened the ensuing abbreviated March with a 23-yard run.

Breckin Rex finished with 93 yards on five carries with a touchdown.

Hummell finished the drive by galloping 27 yards to the end zone.

Franchino made the extra-point to set the 37-13 final.

How to change the oil in your Parker transmission [Video]

How to support the caregivers in your life

Nervous about driving in winter? Try this hack and forget the forecast