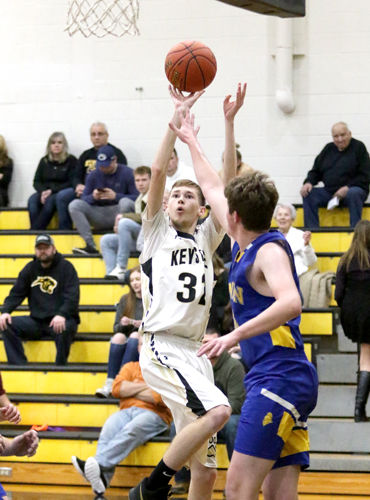 Keystones Colin Say provided 12 points and four blocks off the bench for the Panthers. 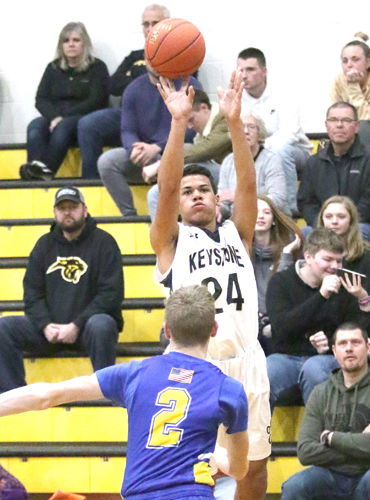 The Panthers Brandon Pierce came off the bench to provide 11 points for Keystone in its win over Union. 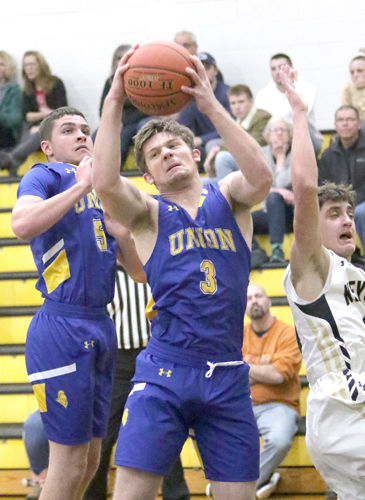 Keystones Colin Say provided 12 points and four blocks off the bench for the Panthers.

The Panthers Brandon Pierce came off the bench to provide 11 points for Keystone in its win over Union.

Keystone hits on all cylinders

Keystone High School's boys' basketball team has proven this year they can play defense with the best of them as the Panthers held opponents to 41.2 points per game in Keystone's first nine contests but on Friday night (Jan. 10), the Panthers demonstrated why their offense shouldn't be taken lightly.

Keystone was an offensive juggernaut especially in the first half on the way to a 74-39 win over visiting Union in a KSAC crossover.

Keystone shot 58-percent from the field in the opening half which includes a 75-percent conversion rate in the second period as Keystone took a 46-20 lead into the break.

"It's always fun when you are making shots," Keystone head coach Greg Heath said. "That pretty much dictates how you are going to do in a game. If you're not making your shots, you better hope your defense is pretty good and keeps you in the game and that has pretty much been the case for us so far this year. When we are making our shots (like we did tonight), it is pretty smooth sailing."

Offensive balance and unselfishness was key in the Panthers' win. Keystone had five players score in double-digits led by 16 points from Troy Johnson while Keystone dished out 20 assists on its 31 converted field goals.

"This was a good team effort," Heath said. "When we are moving the ball and we are making shots, it is pretty fun to watch."

Colin Say came off the bench for 12 points for the Panthers while Brandon Pierce netted 11 points as Marc Rearick and Andrew Lauer each totaled 10 points.

Keystone opened the contest by sinking four-straight 3-pointers on the way to a 12-4 lead in the opening four-plus minutes of play.

Lauer sank two 3-pointers in the span while Rearick and Corey Rapp each connected from long distance.

"Seeing the ball going through the basket really loosens guys up," Heath said.

Also important for the Panthers in their opening barrage was Isaak Jones who made three offensive rebounds in the span to keep Keystone possessions alive.

The play of Luke Bowser kept the Golden Knights within striking distance as he was able to slice through the Panthers' defense for layups. Bowser's third-straight layup in the quarter cut the Keystone lead to 14-6 with 2:24 remaining in the frame.

Keystone's Say came off the bench and connected on three baskets in the final 2:56 of the period to give Keystone a 22-11 lead.

Say drained a baseline jumper to open the second period for the Panthers.

Union's Truman Vereb connected on a midrange shot on Union's subsequent possession to make the score 24-13 in Keystone's favor.

The Panthers put the game away over the next four-plus minutes by going on a 17-0 run to push their lead to 41-13 with 2:23 remaining in the half.

Rearick opened the Keystone scoring barrage with a 3-pointer followed by a layup.

Lauer and Johnson each had five points in the span for the Panthers as Lauer drained a 3-pointer and had a layup while Johnson banked home a layup and converted an old-fashioned 3-pointer.

Heath had a simple reason as to why his team was able to go on its game-changing run.

"Defense was the key to that stretch," Heath said. "We were really limiting high percentage shots. We were rebounding well and on the offensive end, we were playing just good, team basketball."

The Panthers turned the golden Knights over five times in the frame with Johnson making two steals while Jones made a theft.

After a pair of layups by Johnson pushed the Keystone lead to 43-14 with 1:30 left in the half, Union scored the next five points in a row with Vereb and Layton Stewart each connecting on a layup. Union's scoring edge cut the Panthers' advantage to 43-20.

Keystone's Pierce closed the frame by draining a 3-pointer at the buzzer.

"(Keystone) just came out and punched us in the mouth right off the bat and we just couldn't get off the canvas," Union head coach Brent Saylor said.

The Panthers outscored the Golden Knights 13-11 in the third quarter to take a 59-31 lead into the final period.

Jones had seven points in the frame for Keystone connecting on a pair of layups and a 3-pointer.

Johnson had two layups for the Panthers in the frame while Pierce connected on a mid-range jumper.

Karter Vogle had two baskets in the period for the Golden Knights while Isaac Saylor drained a 3-pointer.

Pierce had three baskets in the final period to help the Panthers attain a 15-8 scoring edge in the period to set the 74-39 final.

Say had a pair of layups for the Panthers in the final period.

"Union is a good team and they are capable of beating any team in this league on any given night, they have that kind of talent," Heath said. "We certainly weren't taking Union lightly."

Even though there were few positives in the loss, Saylor feels there is something his team can learn from the setback.

"(Keystone) is a playoff-caliber team and it is one of the best teams in the league and if we want to be a playoff team we have to learn how to compete with them," Saylor said.

As this issue went to press, Keystone had a road contest against North Clarion yesterday (Jan. 13) and are scheduled to host A-C Valley tomorrow (Jan. 15).

How to take a dream cruise on an authentic sailing ship

6 hacks for savvy parents to save time and money

Tips to prepare you and your loved ones for an emergency