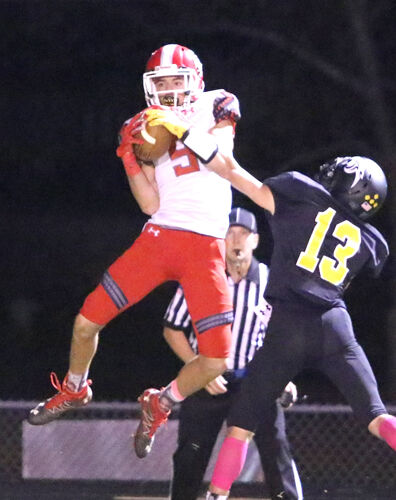 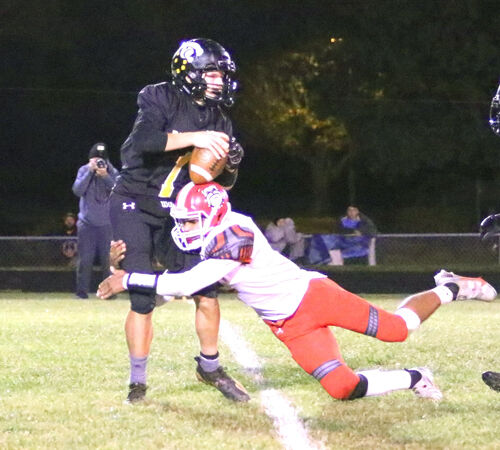 The Bulldogs Joseph Mansfield makes a sack on Keystone quarterback Bret Wingard. Mansfield had four sacks and blocked a punt.

The Bulldogs Joseph Mansfield makes a sack on Keystone quarterback Bret Wingard. Mansfield had four sacks and blocked a punt.

Redbank Valley High School's football team held its postseason fate in their proverbial hands and the Bulldogs made sure there was going to be no doubt Redbank Valley would be in the playoffs.

The visiting Bulldogs took care of business with a 26-0 takedown of Keystone on Friday night.

"Joe is just a special player," Redbank Valley head coach Blane Gold said. "He has really worked hard to develop his game in regards to his strength but his speed, his get off, his pass rush is what makes it tough for any opponent we face."

Redbank Valley's defensive pressure was never more evident than it was at the 4:16 mark of the third quarter. The Bulldogs clung to a 6-0 lead as Keystone was at its 10-yard line. Wingard dropped back to pass and was swarmed under by Redbank Valley's Aiden Ortz. Ortz sacked Wingard and knocked the ball loose. Mansfield swooped in and scooped up the loose ball at the 3 and ran into the end zone for the touchdown.

"I looked over and I saw the ball and I said oh' and I just went over and picked it up and went in and scored," Mansfield said discussing the pivotal play.

The win clinched a playoff spot for the Bulldogs which eased some of Gold's pregame worries.

"All day today, I was nervous and sick to my stomach because it was pointed out to me that if we win, we are the No.1 seed in the district playoffs but if we lose we were probably out of the playoffs," Gold said. "I made the decision to tell my captains that. I didn't tell the rest of the team that and they knew what was on the line."

Mansfield was one of the Bulldogs' players who knew what was at stake.

"This was a really big deal," Mansfield said of the win. "We had to get our seniors a win and we knew if we didn't win this one, we were out."

Redbank Valley opened the contest with a tidy five-play, 80-yard drive which was capped by Hudson Martz bulling his way four yards into the end zone.

Two key plays on the drive was a 44-yard run by Ray Shreckengost and an 18-yard completion from Gunner Manigiantini to Dalton Bush. On Shreckengost's run, Mangiantini took the shotgun snap, darted to his right and made a pitch to Shreckengost who rumbles down the right sideline before being hauled down at the Keystone 15. The very next play, Mangiantini threw a dart to Bish out in the left flat and Bish darted inside and ran inside the Keystone 10 before being tackled at the Panther 7.

Shreckengost was the Bulldogs' leading rusher gaining 73 yards on 12 carries.

Keystone got near midfield on the following drive taking advantage of three Redbank Valley offsides penalties while Nick Weaver broke off an 11-yard run. Facing a second-and-5 at the Panther 46, Wingard was sacked by Mansfield. On the next play, Mansfield and Brenden Shreckengost sacked Wingard for a 10-yard loss forcing a Keystone punt.

Keystone's run defense rebounded from its struggles on the Bulldogs' opening drive of the game by stopping Ray Shreckengost for no gain on back-to-back plays. On third down, the Panthers' Logan Sell dropped Marquese Gardlock for a 1-yard reception forcing a Redbank Valley punt.

The Panthers went three-and-out on their following drive. Weaver's punt put Redbank Valley at its own 39.

On the very next Redbank Valley play, Mangiantini found Gardlock for a 15-yard completion putting the Bulldogs at the Keystone 30.

Later in the drive, Mangiantini found Tate Minich for a 13-yard completion as the Bulldogs moved inside the Keystone 20. However, the Redbank Valley drive would stall at the Keystone 18 where the Bulldogs turned it over on downs.

It appeared the Panthers would capitalize on the change of possession as Weaver broke off a 12-yard run on the opening possession of the drive and two plays later Wingard connected with Nellis on a screen pass and Nellis rumbled 28 yards to the Redbank Valley 41. On the following play, Weaver broke through the Bulldogs' front seven and barreled to the Redbank Valley 18. A false start penalty and an illegal block would eventually led to disaster which has been a common theme for the Panthers in recent games according to Keystone head coach Ryan Smith.

"Things like that have been happening the past two weeks against Brockway and Curwensville," Smith said. "You can't kill drives with penalties; you can't turn the ball over. You have to maximize your opportunities. There are just times when we have too many self-inflicted wounds."

Facing a third-and-29, Wingard attempted a pass down the middle that bounced off a Bulldog defender and landed in the hands of Redbank Valley's Ortz who returned the pick from the Bulldog 25 to the Keystone 15 where he was knocked out of bounds.

A holding penalty on the first play of the ensuing Redbank Valley drive affected the Bulldogs' scoring opportunity as the Bulldogs got to the Keystone 6 with Mangiantini rushing for 19 yards but Keystone's Zander McHenry stopped Ray Shreckengost for no gain on fourth-and-short giving the ball back to Keystone at its 6.

The Panthers wouldn't be able to capitalize on the turnover on downs as on third-and-5 from the 11, Wingard attempted a pass to Weaver but the ball went off of the tailback's hands and was picked off by the Bulldogs' Trenten Rupp who returned the interception 25 yards for an apparent touchdown. Rupp's return was nullified by a block in the back penalty on the return put the Bulldogs at the Keystone 17.

Redbank Valley couldn't capitalize on this turnover either as Mangiantini saw a pass to the end zone picked off by Gavin Hogue who returned the ball to the Panther 7 with 2:27 remaining in the half.

The Panthers maintained possession the remainder of the half.

Keystone opened the second half by driving to midfield with Nellis gaining 10 yards on a rush while Wingard connected with Keenan Heeter for an eight-yard gain. However, on third-and -2 at midfield, Minich dropped Weaver for a one-yard loss forcing a Keystone punt. Mansfield charged in and partially blocked Weaver's punt and it went out of bounds at the Bulldog 40. Along the sidelines, Keystone was flagged for a late hit putting Redbank Valley at the Keystone 45.

The Bulldogs moved to the Keystone 33 but Mangiantini was dropped by Hogue for a 6-yard loss on a third down pass play and Redbank Valley's Martz put his punt at the Keystone 10.

On the Panthers' first play after the punt, Wingard dropped back to pass but was hit by a blitzing Ortz. Ortiz's hit on Wingard knocked the ball loose and it bounced to the Keystone 3 where Mansfield scooped up the ball and ran into the end zone for the touchdown.

"I have so much faith in our defense, I felt once we got up by two scores, it loosened things up," Gold said.

Mangiantini's two-point conversion pass to Marshall fell incomplete but the Bulldogs held a 12-0 lead with 4:16 left in the third quarter.

Early in the fourth quarter, disaster struck the Panthers at their own 26 when Keystone's Weaver fumbled and the Bulldogs' Kolby Barrett pounced on the loose ball at the Keystone 30.

Redbank Valley converted the turnover into points three plays later when Marshall leaped into the air in the end zone and pulled in a pass from Cam Wagner for a 25-yard touchdown.

Wagner came in to relieve Mangiantini and completed 3-of-5 passes for 37 yards and two scores.

"There are times where we plug different guys in looking for a spark," Gold said referring to the quarterback change. "Fortunately when you have 45 (players on your roster) you can do that. Gunner and Cam do different things. We always have a package for Cam ready and he went in and he was able to make some plays. It is good to have varsity quarterbacks who can do things for us."

Marshall was flagged for an unsportsmanlike conduct penalty after the touchdown moving the Bulldogs' kickoff back 15 yards but the Panthers' field position advantage was nullified as Mansfield and Martz made back-to-back sacks on the Keystone drive and the Panthers turned the ball over on downs at their own 10.

Wagner connected with Bish for a 10-yard touchdown on the Bulldogs' first play after the turnover downs to cap the scoring for the Bulldogs.

The touchdown was Bish's first touchdown in his football career.

At the time of this writing, Keystone was not scheduled to have a game Friday.