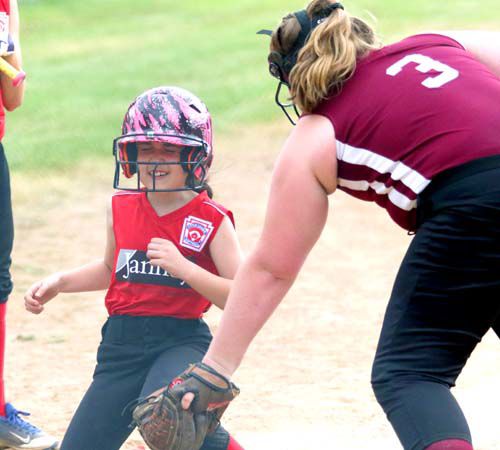 Goble's Ali Burford makes a tag at the plate on Janney's Kara Wilson when Wilson attempted to score on a wild pitch in the top of the second inning. 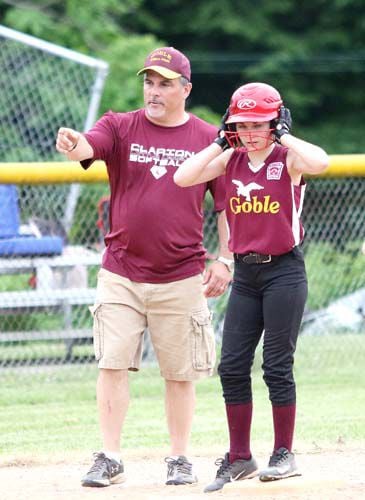 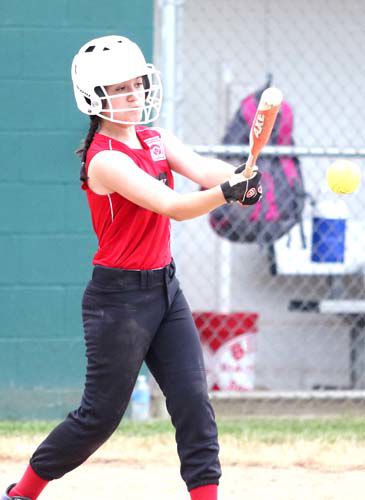 Janney's JJ Wilson had a single and scored two runs in the loss.

Goble's Ali Burford makes a tag at the plate on Janney's Kara Wilson when Wilson attempted to score on a wild pitch in the top of the second inning.

Janney's JJ Wilson had a single and scored two runs in the loss.

CLARION - With the accelerated start to the 2020 Clarion Little League softball season, teams were scrambling to find their footing in the early going and Goble was no exception.

Goble seemed to catch its stride Wednesday night (June 17) as it took down Janney 21-11 in five innings at Paul A. Weaver Park.

Goble manager Dave Estadt was ecstatic his team got its first win of the year.

"This is fantastic," Estadt said. "These girls just wanted to come out and play ball. We only had two practices and three games so to get our first win playing as a team is fantastic."

Ali Burford had two singles and three RBIs for Goble while Kelsey Best ripped a leadoff inside the park home run in the bottom of the third.

"(Hitting) was important for their own confidence," Estadt said. "With having just two practices, they really don't have confidence of what they are doing so getting the bats going is huge."

Janney (0-3) came into the game shorthanded as it was missing its regular starting pitcher Lacey Lauer, who suffered a leg injury in Janney's previous game. Janney was forced to use three pool players; Brenna McNaughton from the C&A team as well as Hannah Love and Livia McGinley from the Ace team.

Janney opened the game with a five-run outburst in the top of the first.

JJ Wilson opened the frame with an infield single. There was an error on the throw to first and another error when Goble attempted to throw out Wilson at second and she came around to score.

After Burford struck out McGinley, JJ Wilson hit an infield single to push home Janney's fifth run of the frame. The inning was ended after the fifth Janney runner crossed the plate because of the league's five-run rule.

Goble answered with five runs in the bottom of the first to tie the score at 5-5.

Janney starter JJ Wilson struck out Best to open the frame but Best reached base on a dropped third strike.

Best stole second and third and scored on an infield single by Addiwyn Campbell. Campbell moved to second on a wild pitch. Addiwyn Campbell came into score on an error on a grounder hit by Burford.

Radaker scored later in the inning on a wild pitch ending the frame.

Janney loaded the bases the next inning but couldn't get anyone home as Burford struck out two batters and tagged Kara Wilson out at the plate when Wilson attempted to score on a wild pitch.

JJ Wilson retired the first two Goble batters in the bottom of the second. Goble's Elizabeth Estadt reached base on a walk and moved to second on a wild pitch. Best looped a fly ball into center that fell in for a hit but did not count because it was determined Estadt left second base too soon and was declared out ending the frame.

Janney responded in the top of the third by putting together a five-run frame to take a 10-5 lead.

Kiskadden, Love and McGinley each reached base on a walk with Kiskadden scoring on an error on a fly ball hit by JJ Wilson. Love came in to score when Addiwyn Campbell attempted to throw her out at third after Kiskadden scored but the throw was offline and Love scampered home. Wilson came into score later in the inning on a wild pitch while Brinley Kiskadden reached on a walk. Kara Wilson and Emilia Arose each pushed in a run on a bases loaded hit-by-pitch and a bases loaded walk, respectively.

Goble responded with a five run set in the bottom of the third to tie the game at 10-10.

Best led off the inning with a shot through the middle of the Janney infield. The ball rolled all the way to the outfield fence. Best scurried around the bases for the inside the park home run.

Burford lofted a single to left to score Hadlee Campbell.

McClain followed with a walk. Burford and McClain both scored on wild pitches later in the inning pushing Goble to the inning run limit.

Best came into pitch in the top of the fourth for Janney. Best retired McNaughton on a groundout and struck out Lillian Kiskadden. However, Kiskadden reached base when Burford dropped the third strike. Lillian Kiskadden moved to third but could advance no further as Best struck out Love and McGinley to end the frame.

Goble added six more runs in the bottom of the fourth to take a commanding 16-10 lead.

Anna O'Toole had an infield single and Burford had a run-scoring single in the frame while two Goble runners scored on wild pitches and one scored on an error.

Earlier in the inning, Goble had two potential runs erases when JJ Wilson tagged out Emily O'Toole at the plate after a wild pitch while Estadt was called out at home for making a headfirst slide.

Brinley Kiskadden reached on a dropped third strike and eventually came in to score on a wild pitch cutting the Goble lead to 16-11.

But Janney could not add to its tally as Best recorded a strikeout and Olivia Radaker threw out Arose at first for the third out of the frame.

The inning was devastating for Janney in another way as Kara Wilson was injured in the inning and had to be removed from the game. Wilson's injury left Janney with just eight available players.

Even though her team came up on the short end, Janney manager Maria Wilson was encouraged by the team's play.

"We have a young team and they are doing great," Wilson said. "Every practice we are getting better and better. Some of the girls are a little nervous because this is their first time playing but they go out and do their best. That's all I can ask for."

6 Fun Facts About How People Are Snacking in Summer 2020

How to have dip for dinner [Infographic]