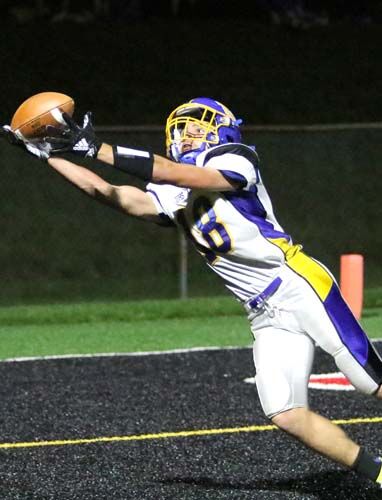 Union/A-C Valleys Karter Vogle makes a diving catch for a 19-yard touchdown in the Falcon Knights 37-7 win over Brockway. Vogle also had an interception. 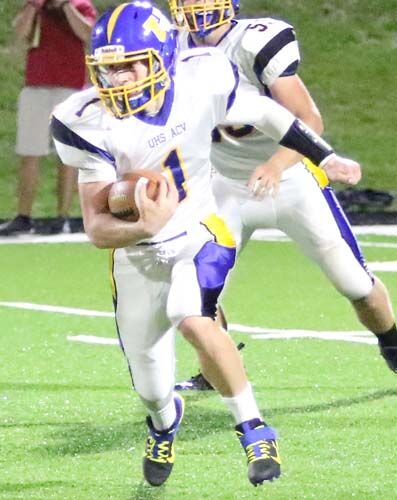 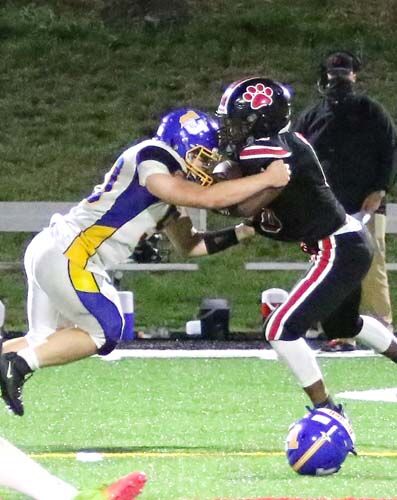 Union/A-C Valleys Karter Vogle makes a diving catch for a 19-yard touchdown in the Falcon Knights 37-7 win over Brockway. Vogle also had an interception.

If there has been one constant in the year 2020 it's the unknown and the Pennsylvania high school football season has been no exception but the Union/A-C Valley football team wants one thing known...the Falcon Knights might be pretty good.

Union/A-C Valley showed how good by putting together a 37-7 road win over Brockway in the season opener for both teams Friday night (Sept. 11).

The Falcon Knights' Tanner Merwin was the catalyst for the offense in his first career start at quarterback. Merwin ran for two scores and threw for a touchdown.

For Merwin, just getting back on the field after the summer of questions was enough.

"It is awesome," Merwin said about the win. "We didn't know if we were going to have a season so to get out here and get this win is awesome."

Merwin finished with 73 rushing yards and two TDs while completing five of 12 passes for 61 yards with one touchdown and one interception.

What shouldn't be overlooked is the Falcon Knights' stifling defense which held Brockway to minus-36 yards rushing. The key disruptive force for Union/A-C Valley was nose tackle Mike Card. Card was able to break into the Rovers' backfield on multiple occasions altering Brockway's point of attack.

"We're really excited about this kid as a sophomore," Union/A-C Valley head coach Brad Dittman said referring to Card. "He is a force."

The Falcon Knights capitalized on the miscue quickly. On the first play after the turnover, Merwin fired a 20-yard strike to Caden Rainey. Merwin took care of the rest of the drive with his legs putting together three rushes for 20 yards including an 11-yard touchdown scamper.

Merwin's touchdown run came on a zone-read play where he faked a handoff then took off toward the end zone.

"The zone read was there," Merwin said. "Brockway was biting (on the fake)."

Merwin's two-point conversion pass was deflected by a Brockway defender but the Falcon Knights' Gaven Bowser caught the ball lying flat on his back in the end zone to complete the conversion giving Union/A-C Valley an 8-0 lead with 7:20 remaining in the opening frame.

It looked like the Falcon Knights were going to put together a positive drive after the turnover when Merwin connected with Karter Vogle for an apparent 10-yard gain but the play was wiped out by a holding penalty and Union/A-C Valley punted two plays later.

A holding penalty wiped out a 33-yard touchdown run by Loren Way. Another holding penalty later in the Rover drive forced Brockway to punt from its own 37 after it started the drive at the Union/A-C Valley 38.

During the punt, Brockway was flagged for a personal foul and the Falcon Knights began the ensuing drive on their own 48.

Penalties were an issue for the Rovers all night as Brockway was flagged 12 times for 117 yards. Moreover, the Rovers were whistled for five personal foul penalties.

The Falcon Knights capitalized on the short field putting together a nine-play drive which was capped by a highlight reel end zone grab by Vogle for a 19-yard touchdown.

Vogel stretched out and caught Merwin's pass before crashing to the ground.

"It was just amazing to help my team out," Vogle said about his touchdown catch.

Culbertson had two rushes on the drive for 19 yards.

Merwin connected with Rainey for the two-point conversion stretching the Union/A-C Valley lead to 16-0 with 4:53 left in the half.

Rainey had 61 total yards of offense (31 receiving, 30 rushing) for the Falcon Knights

The Falcon Knights forced a three-and-out on the following River possession and Union/A-C Valley got the ball back at its own 35 with 2:13 remaining in the half.

Two plays after the punt, Merwin ran a quarterback option over the right side of the offensive line. Merwin got to the line of scrimmage, broke left found some daylight and outraced the Brockway defense for a 59-yard touchdown.

There were two times on the scoring run where it looked like a rover defender would tackle Merwin from behind but Merwin escaped both tackles and made it to the end zone.

"In previous years, I was always getting caught on plays like that," Merwin said. "It was finally nice to run one in."

The Falcon Knights outgained the Rovers 177 to 60 in the first half. Moreover, Union/A-C Valley held a 116 yard to minus-2 yard rushing advantage.

It looked like the Falcon Knights squelched the Rovers' opening drive five plays into the half as Vogle picked off a Ford pass. However, Union/A-C Valley was flagged for roughing the passer so Brockway retained possession.

Ford connected with Austin Schmader on a screen pass that went for 25 yards. But the Rovers couldn't capitalize on the long gainer as Vogle picked off a Ford pass in the end zone for a touchback.

Vogle made the interception with a Brockway receiver draped over his back.

The Falcon Knights weren't able to capitalize on the turnover and were forced to punt after a three-and-out.

The teams traded punts the remainder of the quarter as Union/A-C Valley took its 23-0 lead into the fourth quarter.

The Falcon Knight offense went into a lull in the third frame as the team lost three yards rushing and didn't complete a pass.

On Brockway's first possession of the fourth quarter, Falcon Knights' sophomore Bailey Crissman made an acrobatic interception of Ford along the sideline giving Union/A-C Valley possession at the Rover 19.

"That interception was just a great athletic play," Dittman said.

It looked like the Falcon Knights capitalized on the turnover four plays later when Merwin threw a pass to that the Falcon Knights' Roxbury and the Rovers' Ben Glasl fought for in the end zone. The officials conferenced and decided Glasl had made the interception snuffing out the Union/A-C Valley drive.

The interception didn't matter in the long run for the Falcon Knights as one play after the turnover, Union/A-C Valley's Eli Penny intercepted a swing pass by Ford and galloped 15 yards for the touchdown.

Murray added the extra-point extending the Union/A-C Valley lead to 30-0 with 9:21 left in regulation.

The Falcon Knight defense was stifling in the second half holding the Rovers to 13 total yards. Union/A-C Valley held Brockway to minus-34 yards rushing in the final two frames.

Union/A-C Valley added its final score with 3:07 remaining in regulation when backup quarterback Crissman plowed into the end zone from two yards out.

Murray added the PAT extending the Union/A-C Valley lead to 37-0. Murray had to kick the extra-point from five yards farther back as the Falcon Knights were flagged for a false start.

On the ensuing kickoff, Brockway's Morelli picked up the kick at the Rover 20 chugged for an 80-yard kick returner touchdown. Lewis Painter knocked the extra-point through the uprights to set the 37-7 final.

"Last year we lost to Coudersport right off the bat so I feel like this win gives us more momentum going into the season," Vogle said. "We got Keystone and we owe them one so we just have to practice harder next week and take this momentum forward."

"Keystone came to our school last year and beat us pretty handily on homecoming," Dittman said. "We definitely want a chance to prove that we are better than that."

After Her Unexpected Diagnosis, Danita Knew Her Sister’s Symptoms Required a Conversation With a Doctor

Back to school in the new normal: What teachers need most this fall