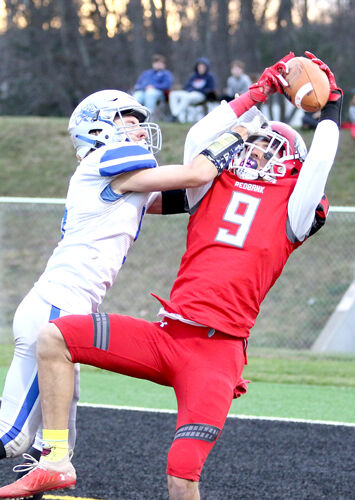 Redbank Valleys Chris Marshall makes a 17-yard touchdown catch for the Bulldogs first score. Marshall had four catches for 50 yards and the touchdown. 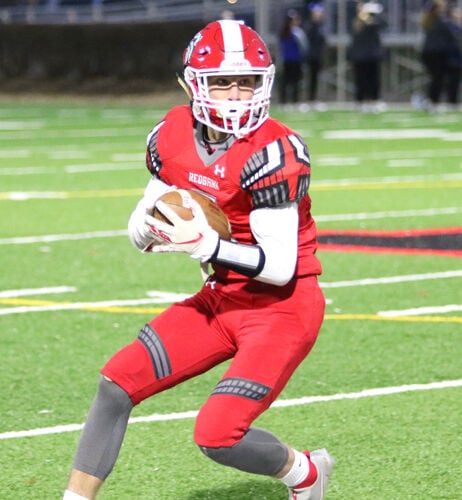 Redbank Valleys Tate Minich hauls in a pass for a first down in the second half of the Bulldogs 19-14 loss to Reynolds. 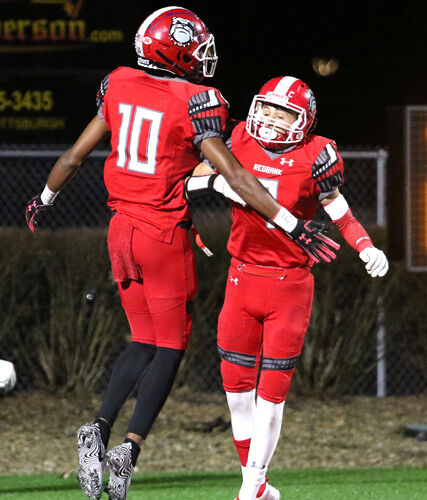 Trenten Rupp and Marquese Gardlock celebrate Rupps 12-yard fourth quarter TD reception which got the Bulldogs back to within one score with 5:11 left in regulation. 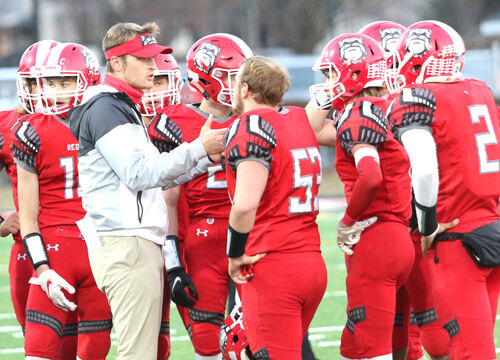 Redbank Valley head coach Blane Gold gives Coltin Bartley instruction during a timeout. Gold has put together a 15-4 overall record which includes a District 9 Class A championship and a PIAA playoff win.

Redbank Valleys Chris Marshall makes a 17-yard touchdown catch for the Bulldogs first score. Marshall had four catches for 50 yards and the touchdown.

Redbank Valleys Tate Minich hauls in a pass for a first down in the second half of the Bulldogs 19-14 loss to Reynolds.

Trenten Rupp and Marquese Gardlock celebrate Rupps 12-yard fourth quarter TD reception which got the Bulldogs back to within one score with 5:11 left in regulation.

Redbank Valley head coach Blane Gold gives Coltin Bartley instruction during a timeout. Gold has put together a 15-4 overall record which includes a District 9 Class A championship and a PIAA playoff win.

Reynolds wraps up the Bulldogs

Last week, the Redbank Valley football team took advantage of six turnovers to seal the Bulldogs' first-ever PIAA playoff win but unfortunately for Redbank Valley, the shoe was on the foot Saturday.

Reynolds took advantage of three Bulldog turnovers and coupled that with a punishing rushing attack to outlast Redbank Valley 19-14 at Brockway in the PIAA Class A quarterfinals.

"Two turnovers in the first half that (Reynolds) capitalized on really hurt us," Redbank Valley head coach Blane Gold said. "You look at the final score, and that is the difference in the ball game."

The Raiders piled up 228 yards on the ground with Cole Toy being the Raiders' workhorse. Toy piled up 129 yards on 27 carries with a touchdown.

Reynolds will move on to host WPIAL champ Jeannette in the PIAA semifinals this Friday (Nov. 20).

The Raiders looked like they were going to march right down the field on their opening drive by converting two first downs and moving into Bulldogs' territory. The Raiders' Brayden Mccloskey converted a pair of seven-yard passes to Aiden Mull on the drive while Toy had three carries for 10 yards. However, a false start penalty on a fourth-and-short at the Bulldog 35 forced the Raiders to punt.

Ray Shreckengost got the Bulldogs offense going on the second play from scrimmage after the punt when he rumbled for a 35-yard gain to give Redbank Valley a first down at the Reynolds 39.

The Bulldogs' surge wouldn't last as the Raiders Dreyvin Livingston picked off a Cam Wagner pass and Reynolds got the ball back at its own 25.

Actually, the Raiders were set up in good field position as Livingston retuned the pick deep into Redbank Valley territory but an illegal block wiped out the good return.

Reynolds responded by piecing together a 13-play, 75-yard drive that was capped by a 4-yard run by Mull.

Mull also had a 17-yard rush on the drive while Jalen Wagner broke off a 15-yard gain on the ground.

The Raiders drive was also aided by a late hit penalty on the Bulldogs which gave Reynolds a first-and-10 at the Bulldog 47.

The Raiders' Livingston's extra-point kick hit the left upright and was no good leaving the Reynolds lead at 6-0 with 10:47 left in the first half.

On the ensuing kickoff, Livingston's kick was high and short up the sideline. The Bulldogs' Joseph Mansfield attempted to field the kick but the ball glanced off his hands and Mull jumped on the loose ball giving the Raiders possession at the Redbank Valley 44.

The Bulldogs' defense stiffened forcing the Raiders to go for it on fourth-and-long. On the fourth down play, McCloskey dropped back to pass and threw deep down the middle to Mull who pulled in the pass at the Bulldog 15 and rumbled into the end zone for the 43-yard touchdown.

Livingston kicked the extra-point to give the Raiders a 13-0 lead with nine minutes left in the first half.

Reynolds held possession for 13:10 for the first 15 minutes of game time.

The Bulldogs responded to the Raiders' score by putting together a 67-yard, nine-play touchdown march capped by a 17-yard strike from Wagner to Chris Marshall who outwrestled Luca Tofani in the end zone for the touchdown reception.

Earlier in the drive, Marshall made a 23-yard grab which gave the Bulldogs a first-and-10 at the Reynolds' 32.

Marshall had four receptions for 50 yards and a score.

Landon Pence added the PAT to trim the Raiders' lead to 13-7 with 4:23 remaining in the first half.

"I was really proud of the way the kids fought," Gold said. "That had the feeling pretty early on at 13-0 it possibly could have been a rout but they fought, they scratched, they clawed."

It looked like Reynolds would add a score before the end of the half as the Raiders moved from their own 23 into Bulldog territory with Toy picking up 30 yards on three carries but the Redbank Valley defense stood up and stopped the Reynolds attack. On fourth-and-4 at the Bulldog 40, Redbank Valley's Brenden Shreckengost made a shoestring tackle to drop Toy for a two-yard loss giving the ball to the Bulldogs on downs with 42 seconds left in the first half.

On the opening kickoff of the second half, the Raiders attempted another short kick recovery and it looked like Reynolds pulled it off again as the Raiders recovered the kick in Redbank Valley territory. However, Reynolds was flagged for fair catch interference on the play giving the Bulldogs possession at the Reynolds 48.

The Redbank Valley reprieve was short-lived as three plays later; the Raiders' Clayton Rhoades intercepted a Wagner Passat the Reynolds 35.

The Bulldogs were flagged for an unnecessary roughness penalty on the play giving the Raiders a first-and-10 at the Bulldog 44.

Reynolds got to the Bulldog 25 with Mccloskey connecting with Mull for a 13-yard completion. But the Raiders' drive stalled and Reynolds gave the ball back to Redbank Valley when a Reynolds trick play failed. Mull took a handoff from Mccloskey and attempted a pass deep down the field but his pass fell incomplete giving Redbank Valley possession at the Reynolds 28.

Redbank Valley's run defense stopped up the Reynolds attack on the following drive as the Bulldogs gang tackled Toy and Wagner for back-to-back two-yard losses. Toy gained two yards on third down and the Raiders were forced to punt.

Martz's punt sailed into the end zone for the touchback giving Reynolds possession at its own 20.

The Raiders put together an 80-yard march which was aided by 30-yards in unsportsmanlike conduct penalties by the Bulldogs. Toy capped the eight-play drive with a two-yard touchdown plunge.

Toy had seven carries on the drive for 49 yards.

The Bulldogs were flagged for two unsportsmanlike conduct fouls on the march.

The Raiders attempted a fake on the conversion attempt but Mull's pass fell incomplete keeping the Raiders lead at 19-7 with 6:51 left in regulation.

The Bulldogs answered the Raiders score with a 55-yard scoring march. Wagner connected with Marquese Gardlock for an 11-yard gain and Reynolds was flagged for a pass interference penalty on the following play. Wagner fired an 11-yard strike to Bish which put the Bulldogs at the Reynolds 17. Facing fourth-and-5 at the Raider 12, Wagner flung a pass over the middle that Trenten Rupp hauled in at the goal line for the touchdown.

Wagner was 14-of-22 passing for 94 yards with two touchdowns and two interceptions.

Wagner was starting in place of Gunner Mangiantini who suffered an injury at the end of the Bulldogs' District 9 championship game win over Smethport two weeks ago.

Gold continued, "Cam doesn't get as many reps in practice as Gunner got then all of a sudden he is thrown in to start at the state level. He put is in a position to win the game at the end; we just couldn't get a stop on defense."

Pence booted the extra-point to cut the Reynolds lead to 19-14 with 5:11 remaining in the game.

All the Bulldogs' defense needed was one stop on the ensuing Raiders' possession but Redbank Valley couldn't get it as Reynolds converted three first downs to run out the remaining clock to seal the 19-14 win.

The Bulldogs finish the season with a 7-1 record.

"It's hard to reflect right now," Gold said. "What makes this season special is the adversity the kids went through. We had to go through the (COVID-19) quarantine before the Coudersport game; we didn't lose any games to any team that beat us in the pass. They ran the gauntlet. You look at our lot of our football games and they fought, scratched and clawed and did everything they could to win football games. It has been a grind. We have been going since July and obviously something had to give tonight. Somebody was going to lose their first game and unfortunately, it was us."