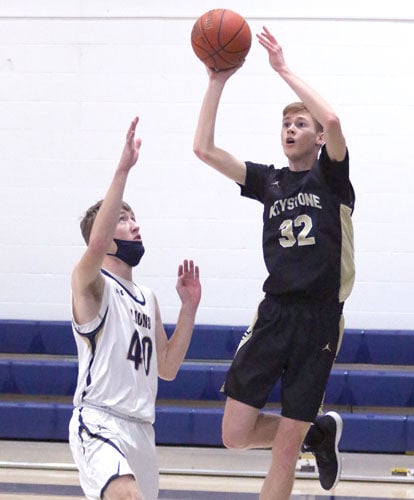 Keystone's Colin Say scored 10 of his team-high 18 points in the second quarter of the Panthers' 61-55 win over Clarion-Limestone Thursday (Feb. 25). 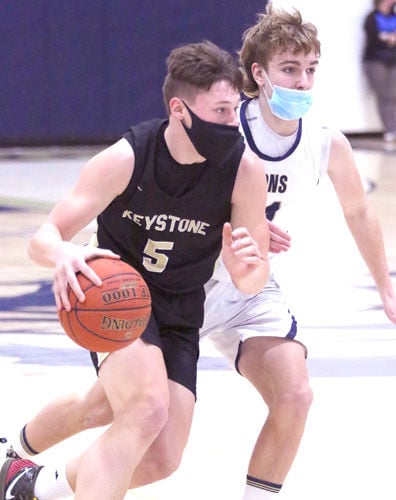 Keystone's Colin Say scored 10 of his team-high 18 points in the second quarter of the Panthers' 61-55 win over Clarion-Limestone Thursday (Feb. 25).

CLARION TWP. - No one can say the Keystone boys' basketball team doesn't have heart, not after what the Panthers accomplished last Thursday (Feb. 25).

Visiting Keystone rallied from multiple deficits on its way to a KSAC crossover win against Clarion-Limestone.

The Panthers trailed at times in each of the first three quarters before sealing the game with an 18-10 fourth quarter scoring advantage.

Keystone's Colin Say was integral in helping the Panthers get off the proverbial mat when they trailed 27-21 in the second quarter as Say scored 10 of his team-high 18 points in the period.

Also a key component in the Panthers' win was Bret Wingard's play in the low post. Wingard grabbed 18 rebounds and made four blocks.

"Bret is a warrior on the boards," Heath said. "And he hit some clutch free throws for us down the stretch."

Heath also crossed a milestone in the win as he became the winningest head coach in Clarion County League/Keystone Shortway Athletic Conference history. Heath came into the game tied with former Union head coach Don Stemmerich at 638 wins. Heath is happy he is just in the same company as Stemmerich.

"Don Stemmerich is still the best in my book," Heath said. "Nothing I am going to do is going to top what he did. He is the greatest. As terrific as a coach as he was, he's an even more terrific human being. He is just a great, great person. Just to be mentioned in the same sentence as Don Stemmerich is just an honor for me."

It was the Jordan Hesdon show for Clarion-Limestone in the early going as Hesdon scored four-straight baskets as the Lions built up an early 12-4 lead. Three of Hesdon's baskets came off of turnovers.

Hesdon finished the night with a game-high 24 points.

The Panthers responded to the Lions' early scoring barrage with a 10-2 run to tie the game at 14-14 with 52 seconds remaining in the opening quarter.

Before going on the run, Heath called a timeout to slow the Lions momentum.

"I said, gentlemen, we are playing really selfish basketball right now and we are making one pass and shooting the ball and they weren't really good shots," Heath on what he said to his players during the time out. "When we get ball reversals, shooting percentages increase. We need to get some ball reversals and start playing like a team.'"

Brandon Pierce had five points in the span for Keystone recording a 3-pointer and a midrange jumper.

Pierce canned two 3-pointers on the night to finish with 10 points.

Logan Sell also had a 3-pointer for Keystone while Zander McHenry made a steal and went coast-to-coast for a layup.

The Lions answered the Panthers' scoring barrage with a 5-0 run in the final 38 seconds of the period to take a 19-14 lead.

Hayden Siegel had a 3-pointer in the span for the Lions while Hayden Callen made a steal near half court and bolted for a layup on the other end.

The Panthers countered with a 5-0 run as McHenry canned a 3-pointer followed by a Keenan Heeter midrange jumper. Say assisted on both baskets.

Hesdon sparked a 6-2 C-L run to counter the Panthers' spurt as he made a steal, fired a baseball pass to Tommy Smith who rattled home a layup followed by a midcourt steal which led to a Hesdon layup.

Hesdon contributed another steal/layup sequence to give C-L a 27-21 lead at the 3:55 mark of the second quarter.

Hesdon made seven steals for the Lions.

Keystone responded to the C-L skein by closing the quarter with a 12-2 scoring edge over the final 3:39 of the half to take a 33-29 lead into the break.

Sell opened scoring for the Panthers with a 2-for-2 effort from the charity stripe. Say bucketed midrange jumpers on three consecutive Keystone possessions as the Panthers grabbed a 29-27 lead. Wingard, Sell ad Pierce assisted on each of Say's baskets.

Smith slowed the proverbial bleeding for the Lions as he was fouled on the following C-L possession and he drained both free throws to tie the game at 29-29 with 1:37 remaining in the half.

The Panthers closed the half with Wingard connecting on a put back layup at the 1:20 mark while Say rattled home a baseline jumper off an assist from Pierce at the 42 second mark.

Wingard had three put back layups on the night and grabbed five offensive rebounds.

The Panthers held a 10-2 rebounding edge in the period with C-L only getting one dead ball offensive rebound in the frame.

The Panthers held a 33-25 rebounding edge for the game.

Keystone opened the third quarter with Wingard connecting on a pair of put back rebounds as the Panthers held a 37-31 lead at the 5:23 mark of the period.

The Lions' Callen picked up his third foul of the game at the 5:57 mark of the quarter and he was forced to sit. Without Callen in the game, the Lions had issues getting the ball into the forecourt as C-L committed four-straight unforced turnovers.

"(Turnovers) have been a nemesis for us all year," C-L head coach Joe Ferguson said. "I thought we did a pretty good job (when it came to ball security) except in that third quarter."

Midway through the period, the Lions got their offense going as they went on an 11-2 run to take a 42-39 lead with 1:21 left in the quarter.

Hesdon had two steal-layup sequences while Alex Painter drained a 3-pointer off an assist from Callen.

The Lions took a 45-42 lead into the fourth quarter. However, C-L missed out on an opportunity for a bigger lead heading into the final fame. With less than five seconds remaining in the quarter, Callen dribbled to his right and launched a 3-pointer with just over a second left. Callen's shot was off the mark but he was fouled by Pierce. Callen made the first free throw but missed the next two as the Lions took a 45-43 lead into the final frame.

Hesdon was fouled on C-L's first possession of the fourth quarter and he made both free throws pushing the C-L lead to 47-43.

Keystone answered with five-straight points in the next 1:30 of game time to take a 48-47 lead.

Sell connected on a layup then Wingard made a steal at midcourt and hustled down the court for a layup.

After an empty Lions' possession, Wingard was fouled on a layup attempt and he made 1-of-2 from the line to give Keystone a 48-47 lead with 6:07 remaining in regulation.

Callen gave the Lions the lead back by driving through the Keystone defense for a layup.

Wingard answered with a layup off an assist by Sell but Callen responded right back taking a pass from Braden Rankin and depositing a layup.

The Lions' lead would be short-lived as Keystone put together a 7-0 run capped by a 3-pointer from Pierce at the 2:29 mark.

The Lions responded with a four-point outburst from Callen as he deposited a pair of free throws and a layup. Callen's outburst trimmed the Keystone lead to 57-55 with 58 seconds left in the game.

The Lions would draw no closer as Wingard and Cameron Easton each drained a pair of free throws to seal the 61-55 win.