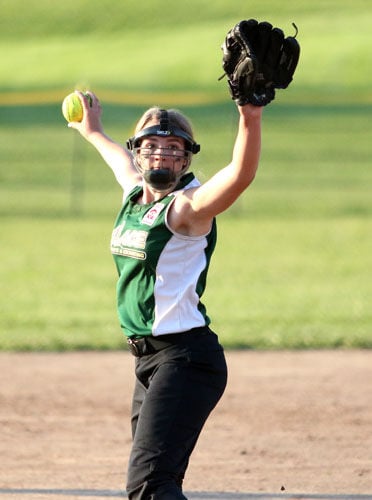 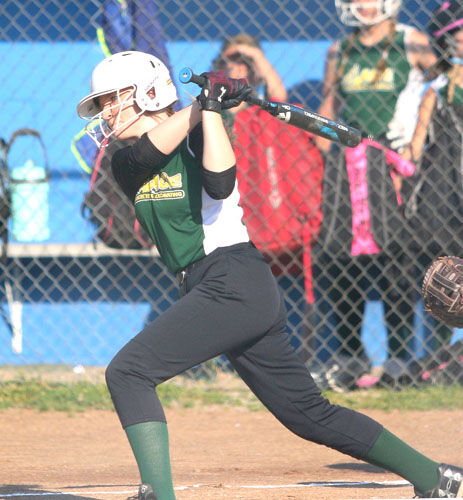 Addiwyn Campbell had a double and three RBIs for Ace in its win over Little It. 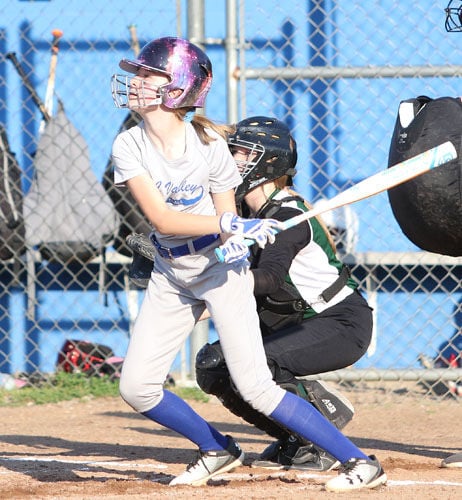 Gianna Louise had a single and scored two runs for Little It in its loss to Ace.

Addiwyn Campbell had a double and three RBIs for Ace in its win over Little It.

Gianna Louise had a single and scored two runs for Little It in its loss to Ace.

WEST FREEDOM - Ace Concrete and Excavating's Little League softball team might have proven once and for all that yes, a walk is as good as a hit.

Jackson, Campbell and Brooke Meals each had three RBIs while Erika Meals had two ribbies.

Campbell had three hits including a double while Jackson had a double and a single. Erika Meals had three infield singles and Brooke Meals had two singles.

The win improves Ace to 5-2 on the season.

A key moment in the game came in the top of the third when Ace rallied for five runs with two outs to extend its lead to 16-10.

"I just stress to the girls when there is two outs, just to run on anything," Ace manager Tiffany Jackson said.

The six-run outburst was doubly important when Jackson held Little It to one run in the bottom of the frame.

Jackson came in and pitched three innings of relief allowing 11 runs on two hits with 13 walks and two strikeouts.

"(Reise) knows she has to focus between each pitch," Jackson said. "This is her first year pitching. This is the first year pitching for both my pitchers (Reise Jackson and Kalyssa Ferguson) and I have been teaching them to calm down and focus on the mitt."

Ace got things rolling in the top of the first inning plating five runs on four hits.

Ferguson drew a lead-off walk and scored on a single by Jackson.

Erika Meals followed with a single and Campbell hit a grounder to Little It pitcher Larkin Pollock. Pollock tossed to first but Campbell beat out the throw and Jackson scored on the play.

Brooke Meals and Emma Zacherl each had an RBI single later in the frame as Ace reached the maximum five-run limit for the inning.

Little It responded with five runs in the bottom half of the frame to tie the game at 5-5.

Regan Best led off the frame with a leadoff single and Gianna Louise followed with a walk.

Both Best and Louise would move around the bases and score on wild pitches trimming the Ace lead to 5-2.

Hayden Hilliard hit into a fielder's choice to score another run as Little It hit the five-run limit for the inning.

Ace plated five more runs in the top of the second to extend its lead to 10-5.

Jackson had a two-RBI double in the inning while Erika Meals had an infield single.

Little It answered with five runs in the bottom of the inning to tie the game at 10-10.

Both runners eventually scored on wild pitches trimming the Ace lead to 10-7.

After a groundout by Best, Louise legged out an infield single and Maddie Kennedy followed with a walk. Louise would eventually score on a wild pitch by Jackson.

Louise was 1-for-2 with a single and two runs scored.

Fulkerson and Hilliard each had two RBIs for Little It.

Pollock issued a leadoff walk to Bella McClain but struck out Zacherl and got Love to ground out to Louise at third. McClain, who was on third, darted for home on Louise's throw to first.

Little It just couldn't get that third out as Pollock walked Addison Lechner and Bella Eggleton in succession. Ferguson hit an infield grounder and Little It tried to get Lechner darting for home but she beat the throw for Ace's second run of the frame.

Jackson walked to load the bases and Erika Meals followed with an infield single which scored two runs.

Campbell followed with a double to score two more runs.

Ace got to finish the inning with six runs since Ace's sixth run scored during an active play. The six-run outburst gave Ace a 16-10 lead.

Jackson held Little It to one run in the bottom of the frame to keep the Ace lead to 16-11.

Pollock led off the frame with a walk and Hannah Kennedy followed with a walk. Pollock would eventually score on a wild pitch but Jackson would allow no more runs in the frame as she got Best to ground out to first, retired Louise on a foul out to first and struck out Maddie Kennedy to end the inning.

Best replaced Pollock in the circle in the top of the fourth and held Ace to two runs on three hits.

Hannah Beggs led off the frame with a triple to left and scored on an infield single by Brooke Meals.

Meals would score on a when Little It had to throw out McClain at first on a dropped third strike.

Zacherl had two singles and an RBI in the game.

Best wiggled out of the jam by striking out Lechner while getting Eggleton to hit a comebacker to the pitcher. Best threw over to first for the force out.

Little It totaled five runs in the bottom of the fourth to cut the Ace lead to 18-16.

Page led off the frame with a single. Page would eventually score on a wild pitch.

Altman struck out for the first out of the frame but Jackson issued four straight walks and a hit by pitch. Pollack drew a bases loaded walk to send home a run while Hannah Kennedy was hit by a pitch with the bases full to send in a run. Hilliard and Pollock would both score on wild pitches. Pollock's run was Little It's fifth of the frame.

The game was ended after the fourth inning due to darkness.

This was Little It's first game since May 22 and team manager Donna Page feels the long layoff played a role in her team's performance.

"We only had one practice since our last game due to the weather," Page said. "It hurts not getting any practices in or any games in. The girls don't get any time together to play together and to learn."

Ace and Little It will be in action tomorrow with Ace scheduled to play LC Nails in Rimersburg while Little It is slated to face Janney at Paul A. Weaver Park in Clarion. Both games are scheduled to start at 6 p.m.

Wish kids made game-related requests during pandemic: How one company helped

Does Your Child Have a Peanut Allergy? Learn about a Treatment Option

Turn on ambiance, turn off mosquitos