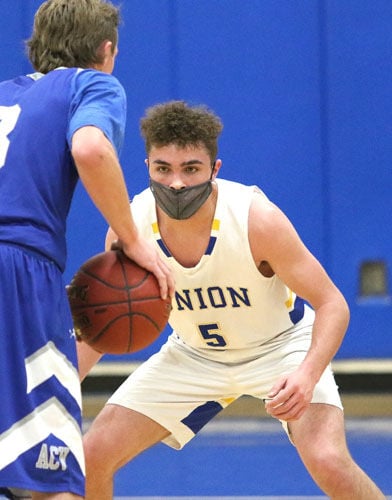 Unions Karter Vogle was a defensive stalwart for the Golden Knights in the half court. Vogle was no slouch on the offensive end as he totaled 14 points to go along with six rebounds and three steals. 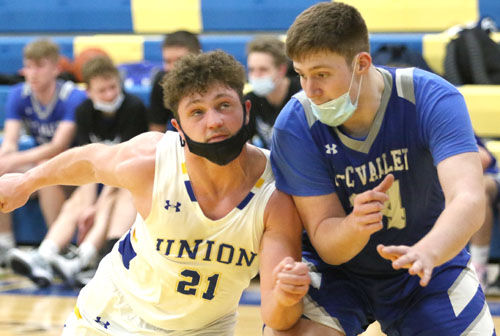 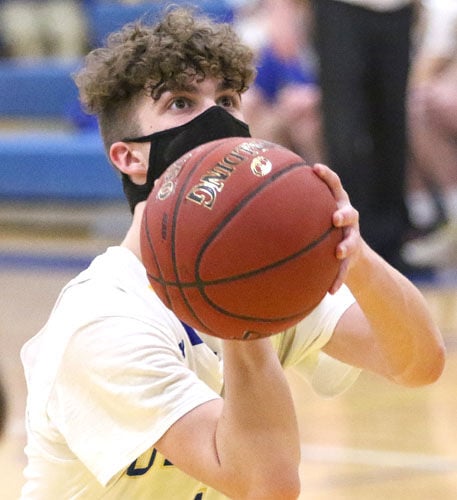 Unions Skyler Roxbury scored all 10 of his points in the second quarter of the Golden Knights win.

Unions Karter Vogle was a defensive stalwart for the Golden Knights in the half court. Vogle was no slouch on the offensive end as he totaled 14 points to go along with six rebounds and three steals.

Unions Skyler Roxbury scored all 10 of his points in the second quarter of the Golden Knights win.

RIMERSBURG - It's getting to the point in the 2020-21 basketball season where a team should be hitting its stride as the District 9 playoffs are just around the corner and if Friday night (Feb. 19) is any indication, the Union boys' look like they are in fine fettle.

The Golden Knights built up a 13-point lead in the second half and held off a furious A-C Valley fourth quarter charge as Union downed the Falcons 57-50 in a KSAC Small School tilt.

Even though his team looked like they were hitting on all cylinders, Golden Knights' head coach Eric Mortimer believes there is room for his team to grow.

"I don't think we have reached our peak yet," Mortimer said. "This team just keeps getting better and better. Our shooting isn't where it needs to be but our defense is there."

Union was the picture of balance in the win over the Falcons as the Golden Knights had four players score in double-digits. Caden Rainey led the way for Union with 18 points while Karter Vogle scored 14. Brock Jordan and Skyler Roxbury contributed 11 and 10 points, respectively, for the Golden Knights.

For as good as Union's offense looked, the Golden Knights' defensive effort might have been a little bit better. Vogle completely flummoxed the Falcons' Levi Orton in when A-C Valley was in the half-court offense in the first half. Vogle held Orton to four points in the first half and both of Orton's baskets came in transition.

"He's a good ball player," Mortimer said referring to Vogle. "It's amazing he can guard somebody like that because (Orton) is quick."

Once the Falcons picked up the pace in the second half, Orton was able to get to the basket as he finished with 21 points in the final two frames ending the night with a game-high 25 points. Orton also grabbed 10 rebounds, made four blocks, made three steals and dished off two assists.

"We thought if we slowed it down, because (Union) likes to push the tempo we would catch (Union) off guard but that's not who we are," McGarvey said. "We tried to change who we were tonight and that's on me. Coaching-wise, that is just a bad decision. We should have picked up the tempo from the start. We're just trying different things as we head toward the postseason."

A-C Valley jumped out to a 5-2 lead by the 4:57 mark of the opening period with Tanner Merwin draining a 3-pointer off an assist from Orton while Eli Penny drove through the Golden Knight defense for a layup.

Carter Terwint opened the Golden Knights' surge with a layup followed by a Rainey layup off a steal. After an empty A-C Valley possession, Vogle drained a 3-pointer.

Rainey deposited another layup at the 1:04 mark of the period and Jordan capped the Union run with a 1-for-2 effort from the charity stripe.

A-C Valley opened the second period with a 7-0 skein in the first two minutes of the frame to tie the game at 12-12. Orton drove for a layup to open the Falcons' scoring. Ryan Cooper followed with a layup for A-C Valley and Eli Penny capped the Falcon scoring binge with a 3-pointer.

Union responded with 7-0 run of its own with Roxbury going off for five points while grabbing two offensive rebounds.

Jordan and Rainey each had eight boards while Vogle grabbed six. Terwint and Bailey Crissman each had five rebounds for the Golden Knights.

McGarvey knows his team has to improve in the rebounding area if it hopes to succeed in the postseason.

"We have to get our big guys get in (the post) and get hungry," McGarvey said. "They have to stop watching the game."

Merwin paused the Union run by draining a 3-pointer at the 2:01 mark of the quarter trimming the Union lead to 19-15.

Merwin connected on two 3-pointers and finished with 12 points.

Roxbury had all 10 of his points in the period.

Orton opened the third quarter with old-fashioned 3-pointers on back-to-back A-C Valley possessions. Orton had the first eight A-C Valley points of the frame as the Falcons sliced the Union lead to 28-25.

However, the Golden Knights answered with a 14-4 run over the final 5:23 of the quarter to take a 42-29 lead into the fourth period.

Vogle had five points in the span including a 3-pointer while Jordan connected on two 12-footers along the baseline.

Jordan had eight of his 11 points in the third quarter.

The teams traded points in the opening three minutes of the fourth quarter with Orton scoring four points for A-C Valley while Rainey went 3-for-4 from the free-throw line and Bailey Crissman deposited a layup off an assist from Rainey.

Crissman, who missed a good portion of the season due to injury, came off the bench to contribute four points and five boards.

"We're trying to work him in slowly," Mortimer said referring to Crissman. "We would like to get him in there more but Carter Terwint is a pretty good player too. Having this many good players is a nice problem to have."

The Falcons' Penny made a layup on the next A-C Valley possession. Orton made a steal on the Union inbounds pass and Orton dished off to Merwin for a layup. The A-C Valley pressure caused the Golden Knights to commit 11 turnovers in the final frame after Union only turned the ball over four times through the first three quarters.

The Falcon pressure sparked a 13-4 scoring binge as A-C Valley cut the Union lead to 51-50 with 27 seconds remaining in regulation.

Orton had nine of the Falcons' points in the span including a 5-for-6 effort from the free-throw line.

The Falcons (7-4 overall) were forced to foul Rainey with 23.5 seconds remaining in the game. Rainey made both free throws pushing the Union lead to 53-50.

Merwin attempted to drive for a basket on the following A-C Valley possession but he lost the ball out of bounds and Union got the ball back. Rainey took the ensuing inbounds pass and was fouled. Rainey sank both free throws to push the Union lead to 55-50.

Vogle made two more free throws with 10 seconds left in regulation to set the 57-50 final.

From amore to l’amour: Discover your language of love

If you own a business, you’ve only got days left to apply for a Paycheck Protection loan