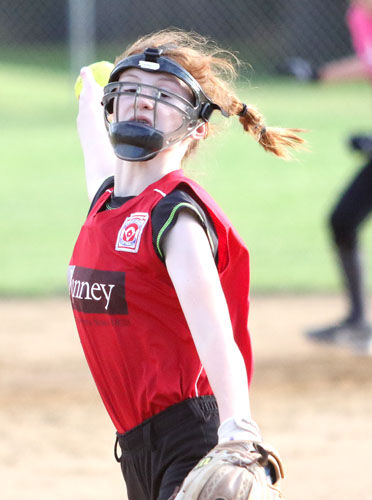 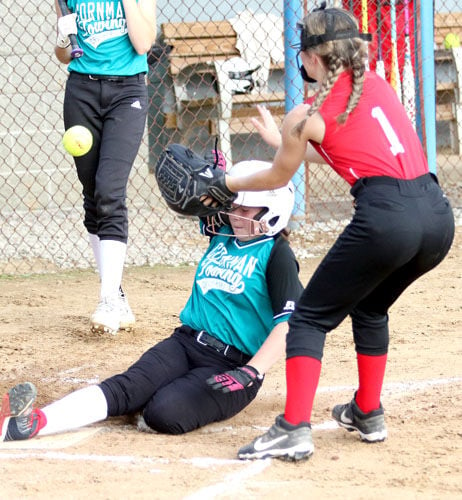 RIMERSBURG - For two innings, the Janney Little League softball team had its hands full with Cornman Towing in Clarion Little League action but a shutdown pitching performance from Megan Hetrick and a five-run rally in the top of the third helped visiting Janney to a 13-9, four-inning win June 11 at Rimersburg.

"She's a pretty good little pitcher," Mike Hetrick said about Megan Hetrick. "Not too bad for a first-year pitcher."

Kelsey Best, Jesalyn Girt and Kara Wilson each had the big hit for Janney in the win as each ripped a two-run single.

The win pushes Janney to a 9-0 mark on the season but manager Hetrick isn't focusing on wins and losses.

"We just want to have the girls go out and have fun," Mike Hetrick said. "It's not for me; it's not for the coaches. We're just here for the girls and we want to let them play and have some fun."

Janney opened the game with a five-run outburst in the top of the first.

Janney loaded the bases with no outs as Best reached on an infield single followed by back-to-back walks by Karlee Mahle and Ryli Girt.

Jesalyn Girt smashed a single to left-center to score a pair of runs while Ryli Girt scored on an error on the play.

Cara Stevenson followed with an infield single and Lexi O'Brien reached on a fielder's choice. Kara Wilson maxed out Janney's scoring in the inning as she laced a two-run single to left-center. Wilson's single put Janney at the five-run limit for the inning.

Wilson finished 1-for-1 with a single, two RBIs and a run scored.

Cornman responded with four runs in the bottom of the frame to cut the Janney lead to 5-4.

Ramsey had two singles and an RBI.

Cornman scored on a wild pitch and Frank came home on a groundout by Brooke Hileman.

Janney starting pitcher Best got out of the inning by getting Madelyn Davis to ground into a fielder's choice.

Hileman came into pitch for Cornman in the top of the second and held Janney to just one run.

Hetrick drew a one-out walk and scored on a groundout by Mahle.

Hileman recorded a pair of strikeouts in the frame.

Cornman rallied for five runs in the bottom of the inning to take a 9-6 lead.

Best struck out Ashlyn Walker but Walker reached on a dropped third strike. Kaylee Gallagher came up next and drew a walk. Best struck out Georgia Fox for the first out of the frame.

Ramsey ripped a single to left to score a run.

Cornman came next and struck out but reached on another dropped third strike.

Ramsey ended up getting home on a stolen base while a bases-loaded walk by Emily Fabiszewski and a bases-loaded hit-by-pitch Annabella Shick. Shick's RBI gave pushed Cornman to the five-run limit for the inning but Cornman had a 9-6 edge.

The Cornman lead wouldn't last long as Janney rallied for five runs in the top of the third to retake the lead at 11-9.

Best came up after Hetrick and ripped a single to left pushing home two more runs for Janney.

There was an error on the play which allowed Hetrick to score giving Janney its maximum five runs for the inning and Janney took an 11-9 lead.

Hetrick came in to pitch in the bottom of the third and struck out Davis looking before issuing a walk to Brianna Anthony. Anthony made it to third on a pair of stolen bases but would get no further as Hetrick struck out Walker and Gallagher to end the frame.

Janney plated two more runs in the top of the fourth to stretch its lead to 13-9.

Janney pushed the envelope in the last two innings when it came to base running.

"We're trying to teach the girls the right way to play as well as have fun," Hetrick said. "We want to get them ready if they ever want to move up to high school ball. It helps when you have a high school coach (Matt Best) helping out. We like to teach them to be aggressive on the bases."

Jesalyn Girt flew out to center but the fly was deep enough to score Mahle.

Ryli Girt would eventually come home on an error as Hileman who reentered at pitcher retired Cara Stevenson on an infield fly to first while getting O'Brien to groundout to the pitcher.

Hetrick gave up a leadoff walk to Fox but struck out Ramsey, Cornman and Frank in succession to end the frame and preserve the 13-9 Janney lead.

The game was called after the fourth inning due to the league-mandated 8 p.m. curfew.

Janney is back in action tomorrow against Fryburg at Paul A. Weaver Park with first pitch scheduled for 6 p.m.

Cornman's regular season is completed. Cornman manager Joe Cornman was pleased with the effort he got out of his youthful squad.

"This team is almost all playing their first year of girl pitch this year," Cornman said. "I had all but three players on the field tonight that didn't play machine pitch or coach pitch last year. From the beginning of the season to now, our team has made lot of improvements. Our fielding needs a little work and we need to tighten up our batting but I think come next year we will be a good team to face. I think we will have it all together and have it all worked out as long as we can keep the same girls and keep the same group together."