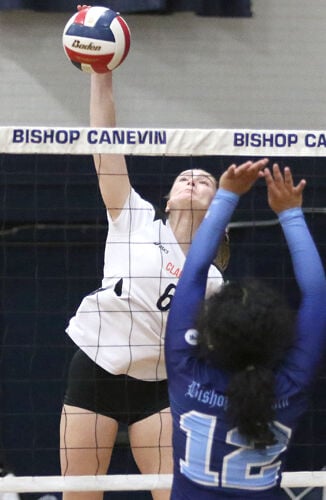 Clarions Erica Selfridge had 16 kills and served for six aces in the Bobcats win. 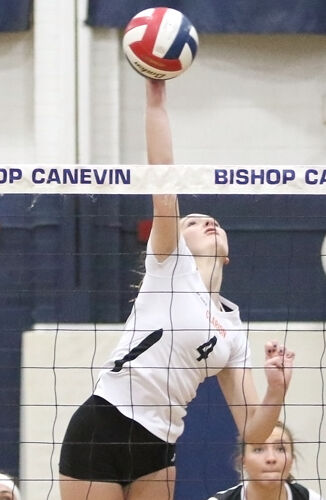 Korrin Burns recorded 16 kills and made a block for the Bobcats in their win. 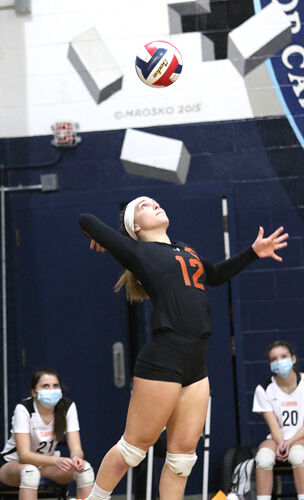 Jordan Best amassed 10 points with two aces and 10 digs for the Bobcats. 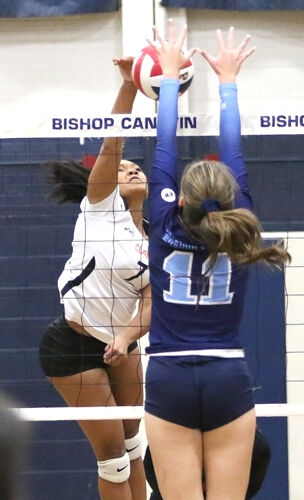 Aryana Girvan made three kills and had a block while also making 10 digs on defense.

Clarions Erica Selfridge had 16 kills and served for six aces in the Bobcats win.

Korrin Burns recorded 16 kills and made a block for the Bobcats in their win.

Jordan Best amassed 10 points with two aces and 10 digs for the Bobcats.

Aryana Girvan made three kills and had a block while also making 10 digs on defense.

PITTSBURGH - When the Clarion Area volleyball team last advanced to the state title game eight years ago, that Bobcats team had to overcome a two-set deficit in the western final to punch their ticket.

There was no such drama when Clarion secured a return trip to the PIAA Class A title game Tuesday night (Nov. 17) at Bishop Canevin.

"It is not an easy thing to get (to the PIAA championship)," Clarion head coach Shari Campbell said. "It is easy to get close but to get there everything has to be lined up right. You have to have everyone healthy. It takes a special crew that is connected to handle the pressure. It is fantastic to see this group get there because they have worked so hard through this whole thing. They have overcome so much adversity and I am so proud of them."

This win coupled with Clarion's three-set drubbing of West Shamokin in the PIAA quarterfinals Saturday has made the Bobcats trip to the title game a relative breeze.

"This is a testament to how hard they have worked," Campbell said discussing the relative ease her team had in getting through the playoffs. "They have made a commitment to being efficient and not making mistakes and not scoring points for the other team. We have hitters who make hits from anywhere and we have (a back line defense) who can make digs and get the ball back to our offense. It is a real team effort to play at this level all of the time."

Balance was the key to the Bobcats win over the Crusaders with Erica Selfridge and Korrin Burns each recording 16 kills apiece.

"We definitely want to have a balanced attack," Campbell said. "I think when we're making blockers work really hard and go from antenna to antenna and they have to worry about our back row attack, it makes it a lot easier to take big swings."

Clarion opened the match with a 3-1 scoring edge with Burns, Selfridge and Peyton Simko each recording a kill in the span.

Simko finished the night with four kills while also serving for four points.

The Bobcats took control of the match when they went on a 7-0 run to take a 16-6 lead. Burns had two kills in the span while Selfridge recorded a pair of aces.

Later in the game, Selfridge recorded back-to-back kills while Aryana Girvan made a block as the Bobcats increased their lead to 23-12.

Girvan finished with a three kills and a block while making 10 digs.

Clarion cruised to the 25-14 win with Brenna Campbell making a kill on game point.

Campbell had three kills while dishing out 32 assists. Campbell also made eight digs.

Bishop Canevin ripped out to a 3-0 lead in Game Two with Keira Kozlowski smashing a kill while Abbie Maziarz made a block.

However, the Crusaders couldn't hold their lead. Burns got Clarion two-straight points registering a block and a kill to trim the Bishop Canevin lead to 3-2.

Burns' effort kickstarted an 11-5 Clarion rally which saw Selfridge bash three-straight kills at one point. Girvan also had an ace in the span.

Burns had three more kills down the stretch while Campbell made a kill on match point to seal the 25-15 win.

Selfridge opened the third game with back-to-back aces as Clarion jumped out to a 5-0 lead. Burns and Girvan each had a kill in the span.

The Crusaders responded by piecing together a 6-1 run highlighted by a kill each by Maziarz and Olivia Thomas.

A net serve halted the Crusaders momentum and the Bobcats used the break to spur on a 9-1 run with Selfridge depositing a pair of kills while Jordan Best served for five-straight points.

Best finished with 10 points and two aces while making 10 digs.

Clarion got their lead to 24-12 with Selfridge making a pair of kills.

The Crusaders staved off match point twice capitalizing on a pair of return errors by Clarion but Bishop Canevin made a long return on a Clarion hit to seal the 25-14 Bobcats' win.

Ava Kiser also had three digs for the Bobcats.

Clarion will take on District 11 champion Marian Catholic in the PIAA Class A finals to be held at Cumberland Valley High School in Mechanicsburg at 10:30 a.m. Saturday (Nov. 21).

"I just want our team to stay healthy," Campbell said when asked what her team's focus will be for Saturday. "We are going to go home, do homework and go to the gym. We ae just going to lay low because this is a crazy time for everybody. This team true example of the light that can be right now. There is a lot that happens between this match and Saturday in terms of growth and maturity and we're going to let that happen too."