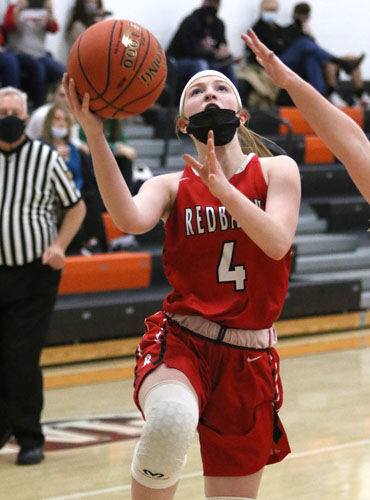 Redbank Valley's Caylen Rearick goes in for a layup after a steal in the second half of the Bulldogs' 29-28 win over Clarion. Rearick finished with eight points for Redbank Valley in the win. 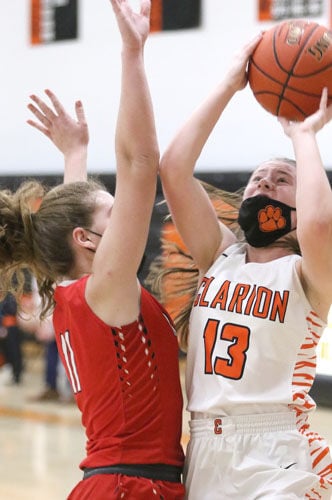 Clarion's Noel Anthony gets defended by the Bulldogs' Emma Huffman on a layup attempt.

Redbank Valley's Caylen Rearick goes in for a layup after a steal in the second half of the Bulldogs' 29-28 win over Clarion. Rearick finished with eight points for Redbank Valley in the win.

Clarion's Noel Anthony gets defended by the Bulldogs' Emma Huffman on a layup attempt.

CLARION - If fans of the Redbank Valley girls' basketball team were expecting the Bulldogs to continue their recent torrid pace in Redbank Valley's road clash with Clarion Feb. 24, those folks would be sorely disappointed but it all worked out in the end for the Bulldogs.

Redbank Valley gritted out a 29-28 win over the Bobcats in a KSAC Large School clash.

The 29 points was the lowest point total of the season for the Bulldogs. Moreover, Redbank Valley didn't have one player score in double-figures.

One possible reason for the Bulldogs' offensive struggles might have been caused by Alivia Huffman not being in the lineup. Huffman suffered an injury during Redbank Valley's win over Forest Area Feb. 23.

"I thought my players off the bench (Katie Davis, Ryleigh Smathers and Brooklyn Edmonds) did a really great job for us tonight.

The Clarion defense also gave the Bulldogs fits especially on the perimeter as Redbank valley did not convert on 3-pointer which is an anomaly for the Bulldogs in 2020-21.

Caylen Rearick, who is normally Redbank Valley's top outside shooting threat, led the Bulldogs with eight points with all four of her baskets coming in transition.

The Bobcats opened the game with a scoring surge which gave Clarion a 7-2 lead with 1:55 remaining in the opening quarter.

Payton Simko, Jordan Best and Ava Cherico each had a basket in the span while Noel Anthony went 1-of-2 from the free throw line. Simko's basket came off an assist by Erica Selfridge while Anthony dished off a helper to Best and Cherico connected on a mid-range effort.

Simko was the Bobcats' leading scorer with eight points.

The Bulldogs responded with back-to-back buckets from Brooklyn Edmonds and Emma Huffman. The four-point outburst sliced the Clarion lead to 7-6 with 58 seconds remaining in the period.

Anthony scored on a fast break layup with nine seconds left in the quarter to pump the Bobcats' lead to 9-6 at the break.

Clarion's Rebekah Ketner opened the second quarter by rattling home a shot from the post but the Bulldogs answered with back-to-back buckets from Rearick and Madison Foringer. Rearick scored her basket off an assist by Claire Clouse while Foringer grabbed a rebound off a Bulldog miss and rattled home the layup. Redbank Valley's outburst cut the Clarion lead to 13-10 with 4:51 left in the frame.

On the following Clarion possession, Simko took a pass from Selfridge on the baseline and rattled home a 12-footer to push the Clarion lead back to five.

The teams traded baskets until the one minute mark in the half when Huffman connected on a put back rebound and was fouled on the play. Huffman made the free throw to convert the old-fashioned 3-pointer. Huffman's retro 3-pointer also cut the Clarion lead to one. The Bobcats turned the ball over on the ensuing possession and the Bulldogs capitalized on the miscue as Edmonds recorded a running layup at the 20 second mark of the frame giving Redbank Valley a 19-17 lead.

Cherico answered for the Bobcats by draining a 3-pointer with four seconds left in the half to give the Bobcats a 20-19 lead at the break.

Both offenses were sluggish coming out of halftime as Clarion kept its one point lead until the 5:33 mark in the third when Simko took another feed from Selfridge and rattled home a bucket.

Selfridge dished out five assists in the game.

On the following Redbank Valley possession, Cherico made a steal and went coast-to-coast for a layup. Cherico's basket extended the Clarion lead to 24-19 with 4:53 left in the frame.

The Bulldogs scored the last two baskets of the period with Katie Davis rattling home a layup off an assist from Huffman while Rearick broke for a fast break layup off a Clarion turnover. The four-point Redbank Valley outburst cut the Bobcat lead to 24-23.

Simko opened the fourth quarter with a put back layup off a miss by Best to extend the Clarion lead back to three points.

The Bulldogs responded with six-straight points in a span of 1:15 to take a 29-26 lead with 5:05 remaining in regulation.

Clouse opened the Bulldog barrage with a layup. Rearick followed with a coast-to-coast layup and Davis plunked home a layup off an assist from Rearick.

At the 4:13 mark of the period, Selfridge took a pass from Anthony and deposited a layup to trim the Redbank Valley lead to 29-28.

However, Selfridge's basket was the last of the game for either team.

Clarion only connected on 4-of-26 from the field in the final two quarters and shot 26-pecent from the floor for the game (13-of-50).

Foringer had a chance to add to the Bulldogs' lead with 2:32 left in regulation when she got fouled on a layup attempt. However, Foringer missed both free throws keeping the Redbank Valley lead at one point.

Anthony was fouled on the subsequent Clarion possession but she missed both of her free throws keeping the Bulldogs' lead at 29-28 with 2:13 remaining in regulation.

The Bobcats connected on just 1-of-7 free throws.

With one minute left to play, Simko was fouled away from the basket. The Bobcats were in the bonus so Simko got an opportunity at the charity stripe but she missed the front end of the one-and-one and Foringer grabbed the rebound.

"We tell our girls to shoot the ball, Ryleigh knew there was less than a minute left and she knew what she was supposed to do," Edmonds said when asked why the shot attempt was made at that time in the game. "Looking back did I want her to shoot that shot? Maybe not. But we are aggressive like that."

The Bobcats had one more chance with 10 seconds remaining as Best attempted a pullup jumper from around eight feet but her shot missed the mark and Foringer grabbed the board to seal the Bulldogs' win.