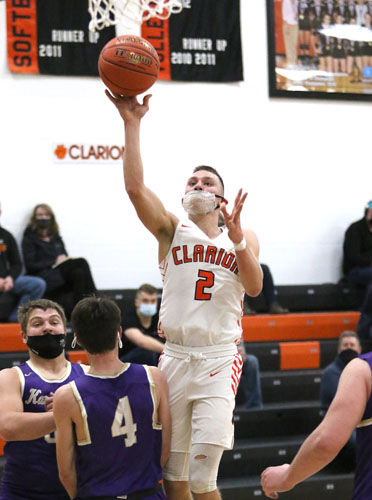 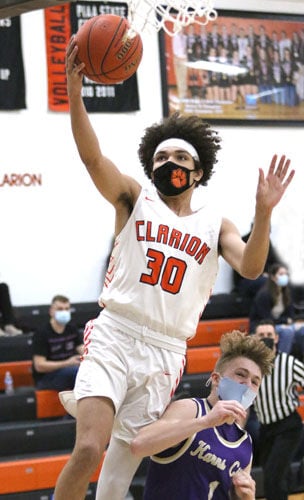 The Bobcats Don Cunningham goes up for a layup. Cunningham finished with four points and two steals. 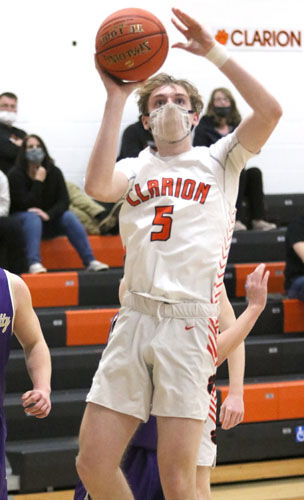 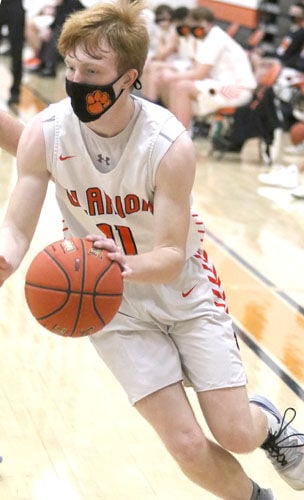 The Bobcats Christian Simko totaled 11 points and had two steals.

The Bobcats Don Cunningham goes up for a layup. Cunningham finished with four points and two steals.

The Bobcats Christian Simko totaled 11 points and had two steals.

CLARION - There is no substitute for experience.

Visiting Karns City saw Clarion sip off six-straight points in less than a minute to push their lead to 45-38 with just over four minutes remaining in the third quarter but there was no panic in the Gremlins as Karns City responded with a 10-0 run and never trailed again in the way to a 73-64 win over the Bobcats.

"It is nice to have seniors who don't panic in those pressure situations," Karns City head coach Chris Bellis said.

One of those Gremlin seniors was Chase Beighley who scored eight of Karns City's 10 points in the skein.

Beighley finished with a team-high 23 points while pulling down nine rebounds and dishing out four assists.

Beighley was one of three Gremlins to score in double-digits with Nathan Waltman and Luke Kramer each totaling 14 points. Waltman completed the night with a double-double as he pulled down 11 boards. Waltman also had three blocks and three assists.

Bellis was happy with his team's balance.

"Tonight, I thought our top eight played better than (Clarion's) top eight," Bellis said. "We had some big contributions off the bench. That is a credit to our guys because we have a wide range of ages on this team. We have two seniors, two juniors, two sophomores and two freshmen on this team. I thought it was important for us to develop some team chemistry. I thought tonight we did develop some team chemistry."

After an opening layup by Beighley, German scored the next three points for the Bobcats from the foul line. Two of German's free throw attempts came via a technical foul called on Bellis.

On the following Karns City possession, Beau Verdill made a steal on a Karns City pass flung an outlet pass to Christian Simko who connected on a layup to push the Clarion lead to 5-2 with 6:30 remaining in the opening quarter.

Later in the period, German and Simko recorded back-to-back 3-pointers to push the Clarion lead to 11-4 with 5:47 left in the opening frame.

Cole Sherwin responded with a 3-pointer on the Gremlins following possession cutting the Clarion lead to four.

The Bobcats closed out the frame with an 8-4 run with German scoring six of the eight Clarion points. The splurge gave Clarion a 21-14 lead heading into the second frame.

The Bobcats' Don Cunningham was fouled on a layup attempt in the opening 15 seconds of the second frame. Cunningham made both free throws to push the Bobcat lead to 23-14.

Karns City found a groove after Cunningham's free throws as the Gremlins went on a 14-4 run to take a 28-27 lead with 3:18 remaining in the opening half.

Chase Beighley and Tate Beighley connected on back-to-back 3-pointers to open the skein. Later in the spurt, Chase Beighley rattled home three-consecutive layups. Waltman capped the scoring on a layup off a nifty pass from Rupp.

A key to the Gremlins' splurge came in rebounding as Karns City limited the Bobcats to one shot possessions when Clarion was on offense.

The Gremlins owned a 10-5 rebounding advantage in the quarter and Karns City outrebounded the Bobcats 48-24 for the game.

"We need to work on our positioning and we have to work on all five guys crashing the boards," Clarion head coach Scott Fox said. "Hopefully if we crash more we don't get out and try to run too fast."

Clarion responded to the Gremlins outburst by closing the half with a 6-2 scoring advantage to take a 33-30 lead into halftime.

The Gremlins' defense limited German to just one field goal and four points in the second quarter.

"It makes no sense because we played a box-and-1 defense on (German) in the first quarter and we played straight man-to-man the rest of the game and I thought we did a better job on (German) when we didn't have any help," Bellis said. "Cole Sherwin and Luke Garing did a really good job of wearing (German) down. And I thought we had a better defensive effort those final three quarters."

The teams traded baskets the first three minutes and change of the third quarter. Hunter Craddock had a pair of layups in the span for Clarion.

Waltman had an old-fashioned 3-pointer in the span for Karns City.

Waltman finished with a double-double totaling 14 points and 11 boards. Waltman also made three blocks and dished off three assists.

Clarion turned up the defensive pressure midway through the period and the Bobcats' full-court pressure yielded three layups in the span of less than a minute as Clarion pushed to a 45-38 lead. Verdill made two steals at midcourt during the span and dished to Simko who connected on two layups. German also converted a steal into a basket for the Bobcats.

Verdill had three steals in the game.

"We saw how good Verdill could be at the end of last year and he started playing more and more," Fox said referring to Verdill. "We did a lot with him at the junior varsity level to get him ready because we knew we were going to need him. He is a big help especially with how well he can handle the ball especially with his height."

The Bobcats were short a player as projected starter Ethan Burford was sidelined due to an undisclosed injury.

Clarion's lead would be short-lived as Karns City answered with a 10-0 run to take a 48-45 lead with 1:32 remaining in the quarter.

Chase Beighley had three baskets in the span for Karns City while Kramer recorded two.

Verdill connected on a put back layup to cut the Karns City lead to 48-47 with 1:19 left in the quarter. But the Gremlins closed the period with a 5-2 scoring advantage with Beighley recording a layup and converting an old-fashioned 3-pointer. Karns City took a 53-49 lead into the fourth period.

Simko connected on a layup on the Bobcats first possession of the fourth quarter cutting the Gremlin lead to two. However, Karns City responded with 12-1 run to take a commanding 65-50 lead with 5:15 remaining. Eric Booher and Chase Beighley each had a 3-ponter in the span for the Gremlins.

The Bobcats responded with a 10-1 run to peel the Karns City advantage back to 66-60 with 2:49 left in regulation. German scored six points in the span converting an old-fashioned 3-pointer while draining a conventional 3-pointer.

But the Bobcats could draw no closer. Karns City staved off the Clarion comeback attempt by converting 7-of-8 free throws down the stretch.

More people are concerned about their financial future: 4 steps to protect yours