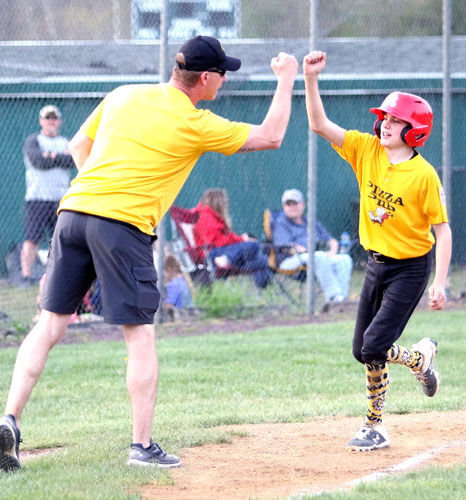 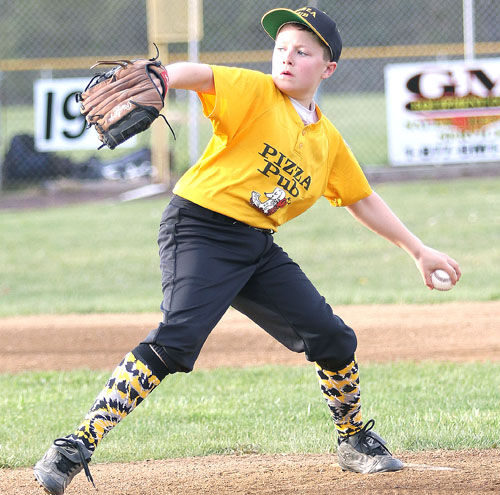 Pizza Pub starting pitcher Billy Kahle was one-out shy of a complete game. Kahle allowed just one run on two hits with one walk and 13 strikeouts. 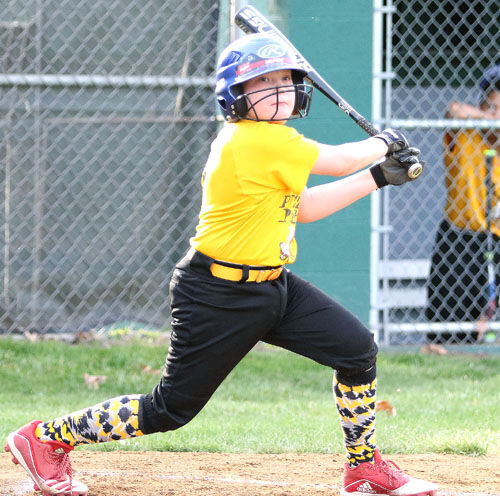 Pizza Pub starting pitcher Billy Kahle was one-out shy of a complete game. Kahle allowed just one run on two hits with one walk and 13 strikeouts.

Pizza Pub ripped off its third-straight win with a 10-1 victory over Burns & Burns at Paul A. Weaver Park April 27.

In its three wins to open the season, Pizza Pub piled up 27 runs while just surrendering four.

"We're hitting the ball and we have been playing well in the field," Pizza Pub manager Ryan Kemmer said. "These kids have been working hard."

Billy Kahle quieted the Burns & Burns bats in the win Tuesday as he tossed 5 2/3 innings allowing one earned run on two hits with one walk and 13 strikeouts.

"It's (important) that he is a 12-year-old," Kemmer said referring to Kahle. "He threw a lot for me last year and the year before. He throws strikes and that's what I ask out of all of my pitchers."

Offensively, Eli Nellis swung the big stick for Pizza Pub going 2-for-2 with a home run and a single. Nellis scored three runs and knocked in two more.

"He is something else," Kemmer said referring to Nellis. "I don't think he has made an out in three games. I think he has three walks and eight hits."

For Burns & Burns, it was its third-straight loss to open the season.

Kahle retired the Burns & Burns hitters in the top of the first recording a strikeout and a pair of groundout.

Pizza Pub leadoff hitter Kolen Kemmer reached on an error and Nellis followed with a bloop single to left. Parker Miller reached on an error to load the bases for Pizza Pub. Kahle chased home Pizza Pub's first run when he grounded out to first. Nellis and Miller both scored later in the inning on wild pitches by Carter Hindman.

Hindman settled down to end the inning on a strikeout and a groundout.

Kahle walked Burns & Burns' Kayden Fiscus to lead off the top of the second but Burns & Burns could not capitalize on having a runner on base as Kahle struck out three-straight Burns & Burns batters to keep the Pizza Pub lead at 3-0.

Hindman kept the Pizza Pub bats at bay in the bottom of the second retiring the side in order on a pair of strikeouts and a lineout by Caleb McKinley to Ethan Corcetti at second.

Kahle retired Burns & Burns in order in the top of the third as he recorded a pair of strikeouts and a groundout.

Pizza Pub tacked on two more runs in the top of the third to extend its lead to 5-0.

Jondell Jones led off the frame with a looping fly ball that looked like it was going to drop for a hit in short centerfield but Burns & Burns centerfielder Tanner Love made a diving catch to take away the hit. Brody McClaine reached first on an infield single. Hindman struck out Kemmer for the second out of the frame.

"Tanner plays a nice outfield and he is always in a position to make a play like that," Burns & Burns assistant coach Brad Larson said.

Nellis came up next and launched Hindman's first pitch of the at bat over the centerfield fence for a two-run home run.

Miller followed with an infield single and got to third on a stolen base and a wild pitch. But Miller was left stranded at third as Hindman got Kahle to groundout to first to end the frame.

Burns & Burns put together a two-out rally in the top of the fourth to plate its first run.

Kahle the first two Burns & Burns batters of the frame on a strikeout and a groundout. Dom Corcetti got Burns & Burns' first hit of the game when he laced a double into left. Hindman followed with a hit to right-center to score Corcetti cutting the Pizza Pub lead to 5-1. Hindman was able to leg out a triple but he would be stranded at third as Kahle struck out Fiscus for the final out of the frame.

Pizza Pub answered the Burns & Burns run with a run of its own in the bottom of the fourth to push the Pizza Pub lead to 6-1.

Lucas Ion opened the frame with a double to center. Ethan Ferguson followed with a single putting runners on the corners for Pizza Pub. Hindman struck out Brady Clinger for the first out and Caleb McKinley followed with a ground ball to second. Burns & Burns second baseman Ethan Corcetti flipped the ball to Dom Corcetti at second for the force out of Ferguson. Dom Corcetti attempted to complete the double play to get Burns & Burns out of the inning but his throw to first was offline and Ion scored.

Hindman walked Kason Kiehl putting runners on first and second for Pizza Pub but Hindman got Jones to hit a comebacker to the mound and Hindman threw on to first for the final out of the frame.

Kahle breezed through the top of the fifth retiring Burns & Burns in order on three-straight strikeouts.

Pizza Pub added to its lead in the bottom of the fifth by plating four runs on four hits.

Kemmer opened the inning with a bloop single to center. Nellis reached base on an error by Ryan Rinker at third. Miller came up next and ripped a shot to right. Kemmer and Nellis scored easily on the play and Miller chugged into third with a triple.

Miller was 2-for-2 with a triple and two RBIs and two runs scored.

After Kahle lined out to Casey Kemmer at first, Ion ripped a double to left to score Miller.

Ion was 2-for-3 with two doubles, an RBI and two run scored.

After Ferguson's single, Hindman had reached the 85-pitch limit for 12-year-old pitchers. Hindman was replaced on the mound by Casey Kemmer. Kemmer got Clinger to ground out to first to end the frame.

Kahle struck out the first Burns & Burns batter of the sixth. Love came up next hit a grounder to Clinger at second. Clinger threw on to first but McKinley had trouble catching Clinger's throw and Love was safe. Kahle struck out Brayden Larson for the second out of the inning. Kahle was removed from the mound after his strikeout of Larson because Kahle had reached the 85-pitch limit. Kolen Kemmer came in to pitch and struck out Wyatt Dehner to end the game.

The loss dropped Burns & Burns to 0-3 at the time of this writing. But Larson feels the team can get things turned around.