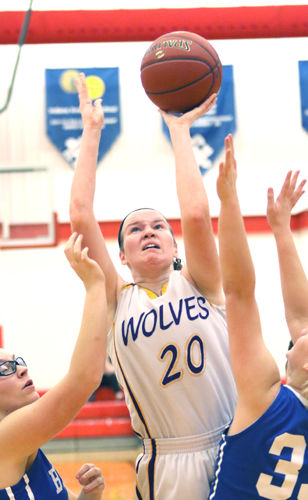 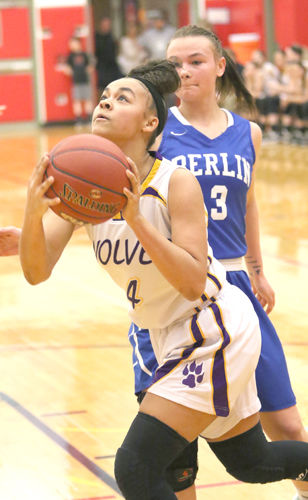 The Wolves Amya Green drives for a layup against Berlin Brothersvalley. Green scored seven points and had seven rebounds. 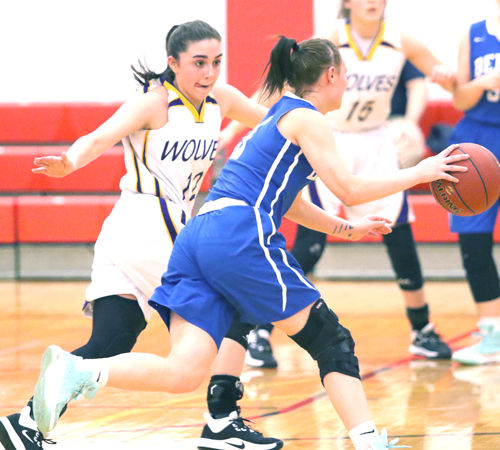 The Wolves Amya Green drives for a layup against Berlin Brothersvalley. Green scored seven points and had seven rebounds.

North Clarion girls' basketball head coach Terry Dreihaup was the first to admit his team wasn't playing their best basketball heading into the Wolves PIAA Class A second round match-up with Berlin Brothersvalley Wednesday (March 11) but North Clarion proved its torpor was just a temporary condition.

The Wolves got double-digit scoring from three players and held the Mountaineers to 18 points in the final two quarters as North Clarion pulled away for a 62-43 win.

"In practice, we have been working on putting together four quarters of basketball and tonight we finally did it," Dreihaup said. "We came out a little sluggish tonight but (what we worked on in practice) really kicked in after the first couple minutes. We found some mismatches in the low post and the girls played great defense."

North Clarion's Abby Gatesman was otherworldly as she piled up 16 points, 11 rebounds and seven assists.

Gabby Schmader and Mackenzie Bauer each bucketed 13 points for the Wolves.

North Clarion came into the game off a sluggish win over Sewickley Academy in the opening round. In that contest, the Wolves rallied from an early deficit to secure the 47-36 win. Before the PIAA opening round win, the Wolves fell to Coudersport in the final seconds of the District 9 Class A championship game.

"After the District 9 championship, where we didn't play well, the girls' confidence was low but after we beat Sewickley Academy, it started to crawl up again," Dreihaup said. "And I knew if we could get the win tonight, it would take our confidence to the next level."

Schmader opened the scoring by draining a 3-point bomb from the top of the key.

Carlyn Hay drained a 3-pointer in the span for Berlin while Jennifer Countryman rattled home a put back layup.

The Mountaineers were able to control the offensive glass in the span and get a bevy of second chance opportunities.

Berlin had 10 offensive rebounds in the quarter and out-rebounded North Clarion 15-10 in the period.

The Wolves responded by closing the frame with an 8-0 scoring edge to take a 13-7 lead into the second period.

Amya Green had five points in the span for the Wolves including a 3-pointer at the 22 second mark of the quarter that gave the Wolves their six point lead. Green drained a pair of free throws earlier in the skein.

Haley Sherman added three points for the Wolves which included a layup.

The Mountaineers countered the Wolves' final flurry of the first by opening the second period with a 7-2 spurt to slice the North Clarion lead to 15-14 with 5:24 remaining in the half.

The Mountaineers' Rayne Stoltzfus had five points in the span including a 3-pointer 13 seconds into the frame.

With 5:49 remaining in the half, Gatesman drove the lane for a layup. She was fouled on the play. She drained the free throw to complete the old-fashioned 3-pointer.

Gatesman's three-point play kick started a 9-0 Wolves' run which extended the North Clarion lead to 24-14 with 4:24 remaining in the half.

The key to the Wolves' run was the defensive rebounding on Berlin shots as the Wolves held the Mountaineers to one offensive rebound in the period and turned Berlin misses into points at the other end.

Bauer was fouled on a layup with 4:49 left in the half. Bauer was unable to complete the three-point play.

Gatesman's passing keyed the next two North Clarion scores as she dished off passes to Schmader and Thompson who each recoded a basket.

The Mountaineers' Alexis Yanosky halted the North Clarion scoring skein by draining a step-back 3-pointer at the 3:04 mark of the frame.

Later in the quarter, Gatesman rattled home a layup and converted an old-fashioned 3-pointer on consecutive North Clarion possessions to swell the Wolves' lead to 33-20 with 1:13 left in the quarter.

Berlin had a final flurry to close the quarter with Yanosky draining another 3-pointer while Countryman scored a layup off a pass from Yanosky with 38 seconds remaining in the half. The five-point spurt by the Mountaineers timed the North Clarion lead to 33-25 at the break.

Gatesman had 12 points and two assists in the frame for the Wolves.

"She knows when the game needs a little push or a little firecracker and tonight, she did it," Dreihaup said referring to Gatesman. "She really took it over and really took the ball to the hoop and found some girls for some nice looks."

Schmader opened the skein with a 3-pointer off an assist by Sherman.

Sherman took assists from Thompson and Gatesman to score back-to-back baskets. Schmader capped the Wolves' outburst with a 3-pointer off a pass from Gatesman.

Dreihaup points to the 10-point outburst as a key point in his team's win.

"We came right out and scored and it gave the girls the confidence they would need," Dreihaup said. "We talked about at halftime that we didn't want to come out in the second half and have an offensive lull."

Berlin answered the Wolves' outburst with a 5-0 run highlighted by a 3-pointer by Yanosky as the Mountaineers trimmed the North Clarion lead to 13 points with 3:47 left in the quarter.

North Clarion closed the frame with a 6-2 run as Gatesman connected on a layup and a midrange jumper while Thompson rattled home a put back layup.

Stoltzfus opened the third quarter with a 3-pointer to trim the North Clarion lead to 49-35 but the Mountaineers would get no closer. The Wolves answered the Berlin basket with three-straight layups with Bauer bucketing two lay-ins while Schmader banked home a lay-up.

The three basket outburst extended the North Clarion lead to 55-35.

Bauer had five more points down the stretch including a 3-pointer as the Wolves put the finishing touches on the 62-43 win.

North Clarion is scheduled to play WPIAL champ Rochester in the PIAA quarterfinals. The game was originally scheduled to be played Saturday (March 14), but the PIAA postponed all PIAA tournament games for at least two weeks in response to the Covid-19, commonly known as coronavirus, pandemic.

Colic, diaper rash, allergies and more: Why infant gut health is key to a healthier baby

Eggs Beyond Breakfast? Yup. Here’s How!

Coughing Shouldn’t Be Routine: Knowing When to Talk to Your Doctor