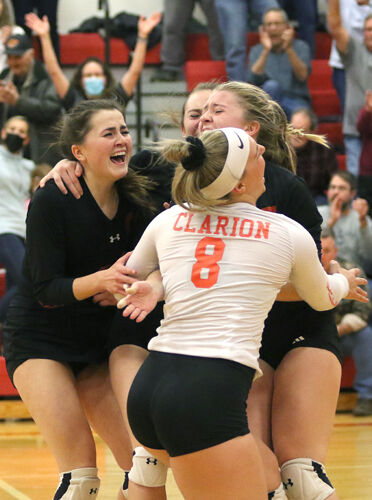 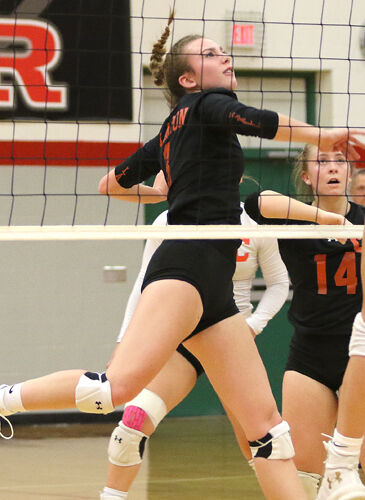 Clarion's Payton Simko watches to see if her kill attempt will get past a pair of Crusader defenders. 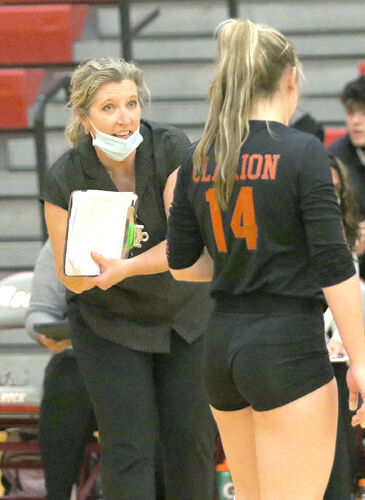 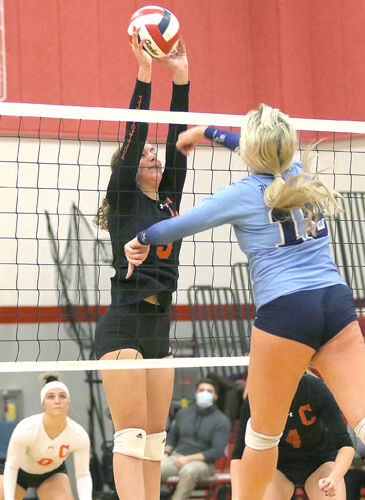 The Bobcats' Adia Needham makes a block against Bishop Canevin.

Clarion's Payton Simko watches to see if her kill attempt will get past a pair of Crusader defenders.

The Bobcats' Adia Needham makes a block against Bishop Canevin.

SLIPPERY ROCK - For about a half an hour Tuesday night (Nov. 16), the Clarion Area High School volleyball team looked like they were in serious trouble as WPIAL champ Bishop Canevin went on a 9-3 run to take a 20-14 lead in Game One of the PIAA Class A semifinals but in the end, the Bobcats demise was greatly exaggerated.

Clarion rallied for seven-straight points and claimed the first set and never looked back as the Bobcats clinched a spot in the PIAA Class A championship by sweeping the Crusaders at Slippery Rock High School.

Clarion's Korrin Burns, who recorded a game-high 33 kills, was just happy she got to experience the win with her teammates.

"It's crazy and it means everything because I can do it with my best friends," Burns said about advancing to the championship game.

Thirty three kills is an eye-popping number not seen often at this stage of the PIAA playoffs. However, Burns wasn't eager to take all the credit for her achievements.

"Honestly, when I go up for that ball, I am thinking what a great set," Burns said. "I really couldn't be having all of these kills without my setter or my passers."

The Bobcats' setter Burns mentioned Noel Anthony led Clarion in assists with 40. Anthony also had eight digs on defense and served for 11 points including two aces.

This is the second-straight year Clarion has swept Bishop Canevin in the PIAA semifinals. Last year the Bobcats toppled the Crusaders on Bishop Canevin's home court by scores of 25-14, 25-15, 25-14.

"This is just a testament of what they pass on to each other," Clarion head coach Shari Campbell said. "The volleyball we play in our gym (during practice) is really high level. We have kids sitting on the bench just waiting their turn. They are really good and when they do get to come in, they contribute. I just think the mentoring of seeing the high level of play and (underclassmen) deciding they want to play like that."

The teams traded blows in Game One like a pair of prize fighters sizing each other up. Clarion was the first to pull away with Aryana Girvan recording three kills and serving for an ace as the Bobcats took a 10-7 lead.

The Crusaders answered the Bobcats' early surge with an 11-2 run to take a 17-12 lead. Bishop Canevin did most of its damage from the service line as Sami Jones and Erin Laquatra each served for a pair of aces.

As mentioned earlier, the Crusaders eventually swelled its lead to 20-14.

Girvan made a kill and Burns followed with back-to-back kills to trim the Bishop Canevin lead to three.

Adia Needham followed with a block to get the Bobcats back within two points. Girvan served for the next four points with Burns making a kill in the span as Clarion took a 21-20 lead.

Girvan had 14 points at the service line including two aces.

After a net serve by Girvan, Burns made two-straight kills to push Clarion to a 23-21 advantage.

A pair of return errors by Burns and Grace Ochs led to the Crusaders tying the game at 23-23.

Bishop Canevin committed an error on its next return when the team lost a point for making four hits. Burns slammed home the kill to emphatically seal Game One for the Bobcats 25-23.

Burns made 12 kills in the first game while Girvan made four kills.

Clarion ripped out to a 10-3 lead in Game Two with Noel Anthony recording back-to-back kills while Simko and Adia Needham each made a block.

The closest the Crusaders got in Game Two was cutting the Clarion lead to 15-10.

The Bobcats closed out Bishop Canevin with a 10-4 spurt with Burns making four kills while Simko, Girvan and Needham each recorded a kill.

The Bobcats got off to another hot start in Game Three ripping out to a 6-2 lead with Burns smashing four kills while Girvan had a kill and Bri Pierce served for three points including an ace.

The Crusaders rallied putting together an 8-1 run with Olivia Thomas recording two kills and a block in the span.

Bishop Canevin got its lead to 15-11 but its lead would grow no further as Girvan and Burns recorded back-to-back kills and Girvan also had a five-point streak at the service line which included an ace as Clarion went on a 8-0 run to take a 19-15 lead.

Abbie Maziarz responded for Bishop Canevin with three kills and an ace from the service line as the Crusaders cut the Clarion lead to 20-19.

Burns answered the Bishop Canevin rally in the same manner she had all night by recording back-to-back thunderous kills to push the Clarion lead to 22-19.

Burns recorded a kill to extend the Clarion lead to 24-20.

Clarion will take on District 1 champ Sacred Heart Academy in the PIAA Class A championship at Cumberland Valley High School in Mechanicsburg Saturday (Nov. 20) at 10:30 a.m.

CLARION TWP. - There was no shortage of excitement in the early going of the Clarion-Limestone boys' soccer playoff game with visiting Elk County Catholic, unfortunately for the Lions most of the early fireworks came from the Crusaders.

Local tracks wave the checkers on 2021

Wow, what a weekend of racing to complete the 2021 season. Lernerville Speedway held their Steel City Stampede which featured 10 different divisions plus a 100-lap Enduro. The event took place over three days as Thursday night was practice for all drivers in all the divisions.

NEW BETHLEHEM - If there has been one constant in the District 9 Small School field over the past six weeks, it has been the Redbank Valley football team beating the stuffing out of all comers.

Even though it doesn't seem possible, we are entering the final weekend of the 2021 racing season.

Hats off to the Falcon Knights

KNOX - If there is one thing that can be said about the 2021 edition of Union/A-C Valley football team is the Falcon Knights are a resilient bunch.

CLARION - Football coaches repeatedly say there are no such things as "moral victories" but that doesn't mean a team can't learn and grow from a loss.

We have been experiencing some beautiful fall temperatures in the past couple of weeks and these temperatures help the race car drivers that have to put on those triple layer fire suits and helmets. Local tracks are also starting to host special events and winding down their respective 2021 …

BRADFORD - The Clarion golfing trio of Kameron Kerle, McKayla Kerle and Devon Lauer each broke 85 to lead the Bobcats to the District 9 Class 2A boys' golf team title at the Pennhills Club in Bradford.

RIMERSBURG - It’s quite an accomplishment when a high school football team can pack an entire game’s worth of offensive and defensive stats into one half of football but Union/A-C Valley did just such a thing Friday night.

All systems go... for now

Fall is officially here. I love this time of the year when the weather turns cooler and the leaves change colors.

Summer is quickly coming to a close and like anything summer related auto racing is slowing down somewhat but there was still racing to be had.

Virtual learning and your child's vision: 3 reasons they need an eye exam now

Are homebuyers still searching for their next great home over the holidays?

You can help solve medicine’s “one-size-fits-all” problem. Here’s how.

Wonder why everything Korean is trending? Kimchi is one major reason

65 Or Older? It’s Time to Assess the Risk of Pneumococcal Pneumonia

How to Bring New Life to Classic Holiday Traditions