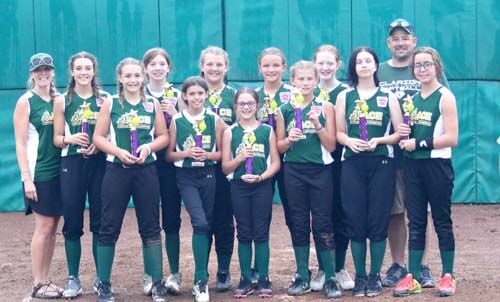 Coaches and players for the Ace Concrete and Excavating Little League softball team pose with their trophies after their 7-6 win over C&A Trees in the league championship game July 23. Ace finished the season undefeated. 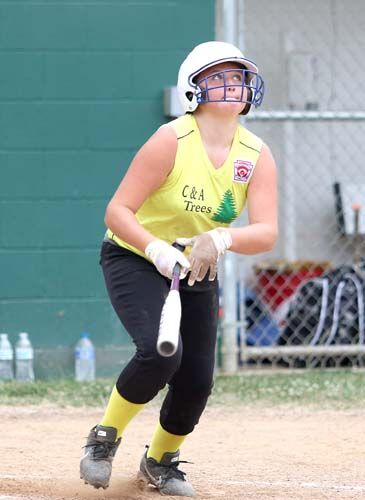 Ryli Girt of C&A trees watches intently as her opposite field hit falls in for a run-scoring single.

Coaches and players for the Ace Concrete and Excavating Little League softball team pose with their trophies after their 7-6 win over C&A Trees in the league championship game July 23. Ace finished the season undefeated.

Ryli Girt of C&A trees watches intently as her opposite field hit falls in for a run-scoring single.

Through the entirety of the 2020 Clarion Little League Softball season including the first round of the playoffs, Ace Concrete and Excavating had little trouble as the team had a perfect record but it was far from easy for the Ace squad in the title tilt with C&A Trees Thursday night (July 23) at Paul A. Weaver Park.

Ace broke a 6-6 tie in the bottom of the sixth when Livia McGinley drew a bases-loaded walk to push home Kalyssa Ferguson with a game-winning run to give Ace the 7-6 win.

Ace manager Tiffany Jackson was pleased with the way her team battled to the finish.

"We worked as a team tonight," Jackson said. "They didn't get down. They went out there and powered back and they were in it to win it."

It looked like Ace was going to cruise after it plated three runs in the bottom of the fourth to extend its lead to 5-1. However, C&A rallied for five runs in the top of the fifth to take a 6-5 lead.

Ace answered the C&A outburst with a run in the bottom of the fifth to tie the game at 6-6 setting up the pivotal sixth inning.

Ace starting pitcher Kaylee Smith cruised through the top of the first retiring C&A in order with a pair of strikeouts.

Ace had a chance to add to its lead as Adisen Jackson walked and moved to third but Haylee Cratsley got Hannah Beggs to ground out to Ryli Girt at second.

Cratsley led off the top of the second with a single to left and reached second on an error. Cratsley moved to third on a wild pitch but was left stranded there as Smith struck out three C&A batters in succession.

It looked like Smith would cruise through the top of the third as well as she retired the first two C&A batters on a groundout and a pop up but Corrina Curry kept the inning alive by singling to center and moving to third on a two-base error. Ryli Girt came up next and ripped a single to right-center scoring Curry. Jesalyn Girt followed with an infield single and eventually C&A had runners at second and third. Smith wiggled out of the jam by striking out Cratsley.

Ace took the lead back in the bottom of the frame. Smith reached base on a one-out single, took second on a passed ball and reached third on a steal. Makayla Clinger grounded out to second and Smith darted home on the groundout.

Adisen Jackson followed with a single to center but Ryli Girt ended the inning for C&A when she snared a liner by Beggs for the third out.

Girt grabbed two line drives during the game which would have went for extra base hits.

"She played a great game," C&A manager Mike Hetrick said. "I thought she peaked in this game. This was the best game she played for us the whole season."

Ace scored a run when Madison Swartz was hit by a pitch with the bases loaded. Ferguson scored when C&A threw out Swartz at first after a foul out. Ace also scored a run on a wild pitch.

Brenna McNaughton and McKayla Carlson each reached base on an error to open the top of the fifth for C&A. Both runners scored on a triple by Ryli Girt trimming the Ace lead to 5-3.

Ryli Girt had a triple and a single and three RBIs.

Jesalyn Girt eventually scored on an error while Cratsley walked, moved to third on a steal and a wild pitch and scored on a groundout by Kaylynn Hetrick.

The rain delay had an adverse effect on Smith's pitching as she seemed to struggle finding her comfort zone after the stoppage in play.

"The rain was not our friend tonight," Jackson said. "It was difficult on (Kaylee) but we got through that difficult (fifth) inning."

Adisen Jackson reached base on a one-out single in the bottom of the sixth and moved to third on a two-base error. Beggs grounded out to second and Jackson scored on the play to tie the score at 6-6.

Cratsley got Reise Jackson to pop up to first for the final out of the frame.

Ferguson opened the bottom of the sixth with a single and moved to second on a groundout by Megan Powell. Cratsley walked Swartz and Emma Zacherl to load the bases. McGinley came up next and drew a five-pitch walk to force home Ferguson with the winning run.

"I was proud of the girls," Jackson said. "They worked hard all year to get to the championship game and I was happy it ended with a win."

Even though his team came out on the losing end, Hetrick was pleased with how his team's season turned out.

"We had a great season and all we asked from them was to improve from game to game and they did a great job," Hetrick said. "Nobody expected us to be in this (championship) game so we are proud of each and every one of them."

A Psoriasis Journey: What Worked for Me

Don’t wait until it’s too late to save your teeth! [Video]

Top 5 ways to encourage your cat to drink more water

Study finds 1 in 5 dogs has parasites: How to stop the spread of worms