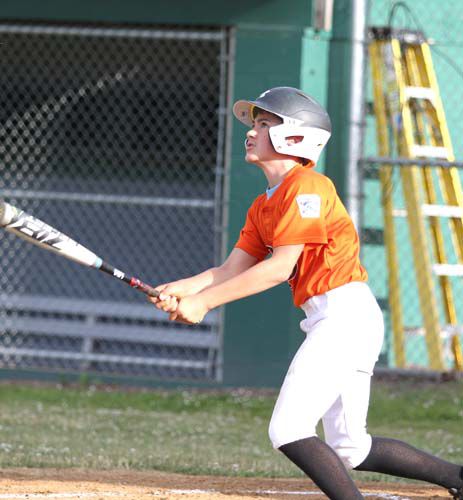 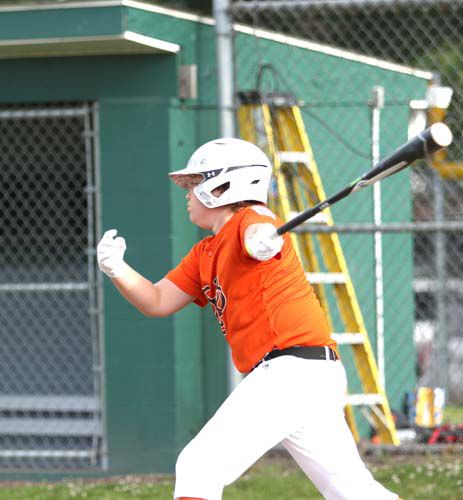 Hayden Hindman had a crucial two-out, run-scoring double in the top of the first. Hindman had two strikes on him and had to foul off a multitude of pitches before his double. 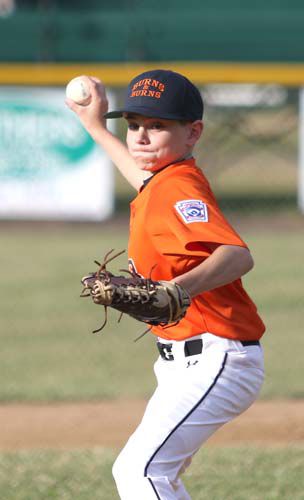 Hayden Hindman had a crucial two-out, run-scoring double in the top of the first. Hindman had two strikes on him and had to foul off a multitude of pitches before his double.

CLARION - Burns & Burns appeared to be heading for a quiet top of the first inning against Pizza Pub in a Clarion Little League clash Friday night but looks can be deceiving.

Burns & Burns put together a two-out rally with the team plating three runs and the three-run rally turned out to be the impetus for Burns & Burns in its 10-3 win over Pizza Pub.

"That (first inning) was the key to the game," Burns & Burns manager Scot Kemmer said. "We didn't give up when we got two outs. We just kept playing ball."

A pivotal batter for Burns & Burns in the inning was Hayden Hindman who fouled off pitch after pitch before looping a double into right field which scored the team's first run.

"That was a good at bat from Hayden," Pizza Pub manager Ryan Kemmer said. "We could have been out of that inning on twelve pitches so that was a really good at bat. He put it right down the right field line and kept (Burns & Burns) rolling.

Hayden Hindman finished with two hits including a double and two RBIs.

Another important piece in the Burns & Burns win was the pitching of starting pitcher Eli Nellis. Nellis went five innings allowing three runs (two earned) on four hits with 11 strikeouts and one walk.

"Eli is just a heck of a pitcher and he is just going to get better as the season goes along," Scot Kemmer said. "We have been kind of holding him back to get his arm strength built up and get even longer outings from him."

Pizza Pub starter Hunter Lechner looked like he would escape the first inning unscathed as he had only issued a one-out walk to Casey Kemmer while getting Eli Nellis to popup on the infield while striking out Carter Hindman. Lechner got two strikes on Hayden Hindman but Hayden Hindman fouled off pitch after pitch before looping a Lechner offering into short right field. Kemmer scored on the play to give Burns & Burns a 1-0 lead.

Briggs Beckwith came up next and drew a walk. During Beckwith's at bat, Hayden Hindman scored on a wild pitch extending the Burns & Burns lead to 2-0.

Charlie Hepfl sent home Beckwith when he ripped a double to left that bounced off the left field fence. Beckwith's run pushed the Burns & Burns lead to 3-0.

Hepfl had two hits including a double and two RBIs

Lucas Ion drew a walk off of Lechner to put runners on first and third for Burns & Burns (Hepfl moved to third on a wild pitch during Ion's at bat. Lechner got out of the jam by inducing a ground ball to short by Marlon Lewis. Ethan Rex threw out Lewi at first for the final out of the frame.

Rex ripped a one out double and moved to third on a wild pitch in the Pizza Pub half of the inning but Rex was left stranded on the base paths as Nellis struck out Billy Kahle and Wyatt Watterson in succession to end the frame.

Burns & Burns (4-2 overall) plated two more runs in the top of the second to extend its lead to 5-0.

Tanner Love drew a one out walk and Nellis followed with an infield single. Casey Kemmer came up next and drew a walk to load the bases for Burns and Burns. Carter Hindman pushed home the first Burns & Burns run of the inning when he got hit with a Lechner pitch. Lechner was replaced on the mound by Watterson after the errant pitch. Watterson struck out Hayden Hindman for the second out of the inning. Ethan Rex attempted to throw out Carter Hindman at first after he dropped the third strike but Carter Hindman slid safely back into first and Nellis raced home from third on the play for the second Burns & Burns run of the frame.

Watterson struck out Beckwith looking for the final out of the frame.

Nellis cruised through the bottom of the second recording a strikeout and two groundouts to keep the Buns and Burns lead at 5-0.

Watterson got through the top of the third scoreless with a huge assist from Pizza Pub left fielder Maverick Mahle.

Hepfl led off the inning for Burns & Burns by drawing a walk. Hepfl moved to second on a wild pitch then he went to third on another wild pitch. Rex attempted to throw out Hepfl at third but his throw was high and skipped into left field. Hepfl darted for home on the overthrow but Mahle fired a strike to home and Rex (who moved behind the plate when Watterson came in to pitch) made the tag on Hepfl.

Nellis fired off an immaculate inning in the bottom of the third. Nellis struck out the side on just nine pitches.

Watterson responded by striking out Burns & Burns in order in the top of the fourth.

Pizza Pub (1-5) sliced into the Burns & Burns lead in the bottom of the fourth.

Ryan Rinker led off the frame with a walk and Kolen Kemmer followed with a single to left.

Rex chased home both runs by ripping a double to left. Rex's hit trimmed the Burns & Burns lead to 5-2.

Rex had two doubles and two RBIs for Pizza Pub.

Rex scored later in the inning on an error to cut the Burns & Burns lead to 5-3.

Lechner ripped a two-out triple off of Nellis but Lechner was left stranded at third as Nellis struck out Jackson Mravintz for the final out of the inning.

Burns & Burns responded with a three run rally in the top of the fifth to push the Burns & Burns lead to 8-3.

Beckwith and Hepfl each had an RBI single in the inning for Burns & Burns while Carter Hindman scored from third on a double steal.

"Any time a team scores, you want to answer right away," Scot Kemmer said. "You want to grab that momentum back and go with it."

Nellis once again retired the Pizza Pub in order in the bottom of the fifth by recording two strikeouts and a foul out to keep the Burns & Burns lead at 8-3.

Nellis had a double in the frame while Hayden Hindman had an RBI single. Carter Hindman drew a walk and scored on an error.

Beckwith came into pitch in the bottom of the sixth and issued back-to-back walks to Rinker and Kemmer but Beckwith wiggled out of the jam by getting Rex to pop out to second and followed with a strikeout of Kahle.

As this issue went to press, Pizza Pub was scheduled to play Lions yesterday (June 29) and Rotary tomorrow (July 1).

Even though his team has just one win on the season, Ryan Kemmer isn't panicking.

Saving Babies' Lives – The Importance of Newborn Screening in all 50 States for Spinal Muscular Atrophy, Leading Genetic Cause of Infant Death

Etch A Sketch Turns 60 This Year: How to Celebrate

4 Home Maintenance Tips to Keep the Outdoors Outside

4 Ways to Boost Immunity Through the Gut Microbiome

RV Owners are the Surprise Financial Success Story of the Year